I tried watching the show when it aired originally but then I got distracted by something and dropped it. I kept current with the show back then for only about two or three episodes and then dropped it. I didn’t pick it back up again until now because I was under the impression that I had found it boring the first time I had tried watching it.

Since the BDs are out though and the second season is airing soon I figured I’d try watching it again. Everyone seemed to like it quite a bit so I thought perhaps something was wrong with me. My opinion of it has improved now that I’ve watched the whole series. It’s still not one of my favourites, but it’s not so boring that I have to read email or watch torrent RSS feeds or write a sub-par essay for school while watching it to keep from killing myself out of boredom. That may not sound like high praise, but I’ve been bored enough to feel the need to multitask even during shows that I like quite a bit, like Star Driver. It’s not rare at all for me to enjoy something and even find it pretty captivating but, nonetheless, still have my System Idle Process at about 50%. To reduce this number I browse eBay for good deals on things I don’t need or stare at progress bars, IP addresses, and hostnames in my torrent client until it’s down to about 10 to 20%.

Working!! is fast-paced enough so that my System Idle Process is at about 25% just by watching it. While it’s not quite ideal — there are still plenty of moments when I feel that a joke has dragged on for long enough — it’s not tedious enough so that I absolutely must multitask to make watching it bearable. 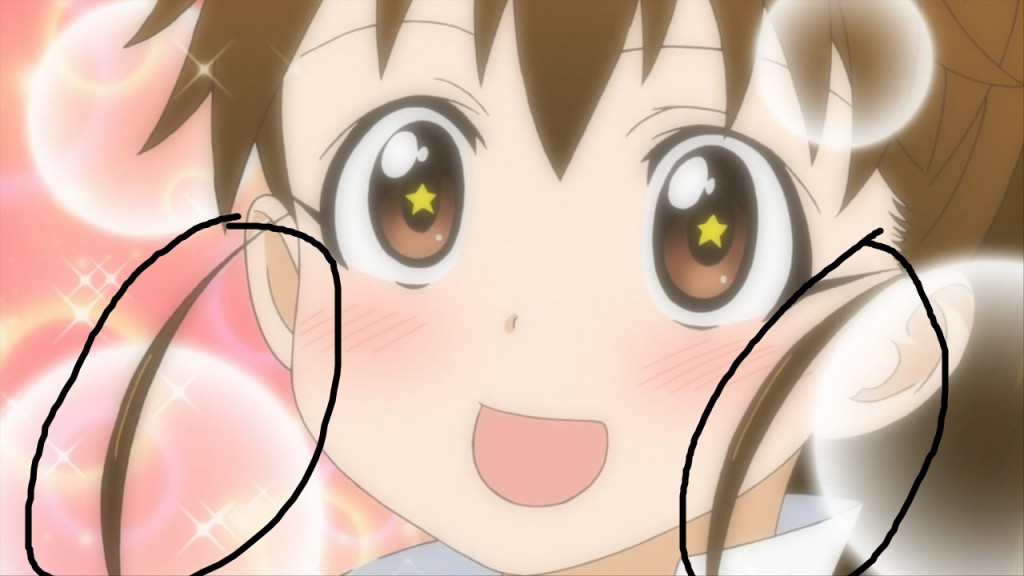 No matter how many times I see it, her haircut is irksome.

Taneshima is probably my favourite character, as I’m sure she’s designed to be. Her CV, Asumi Kana, sure does get that squeaky little girl quality in the voice right. My biggest complaint about the show though are those two thin strips of Taneshima’s hair that hang forward over her ears in a really unnatural and ridiculous way. This bothers me way more than it should, but I can’t help it. Hair just doesn’t do that in the real world! It’s as though she uses the same hair mousse as Goku but only in those two narrow strips of hair, which makes it even more annoying than when the entire haircut a character is consistently unrealistic or gravity-defying. That it’s just one small feature of her haircut that’s ridiculous is what makes it so aggravating. 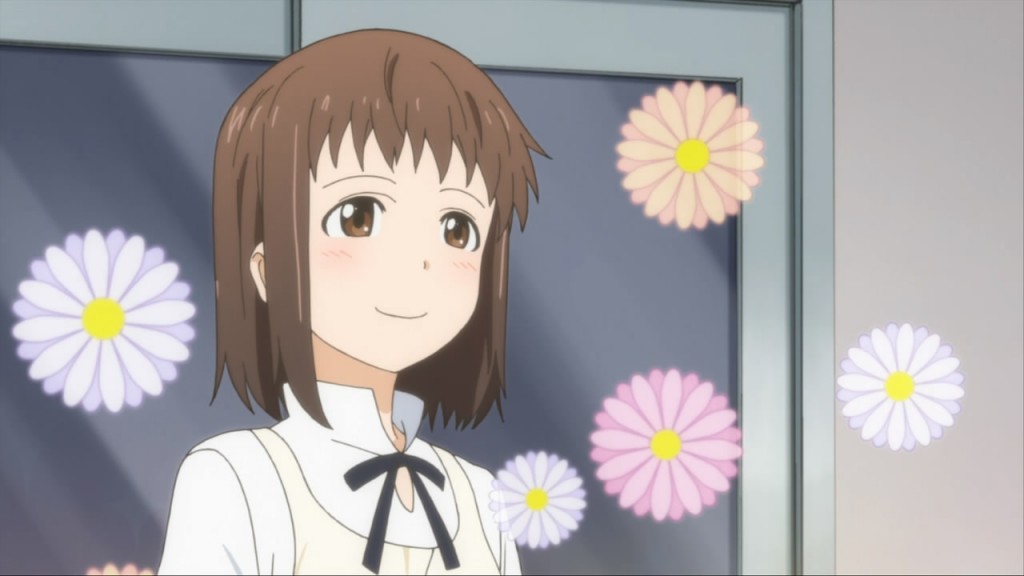 An imouto in whose sewa the protagonist is habitually in is always a plus.

There are, of course, a couple of features of the show that automatically garner it points, such as crossdressing. Whether it’s men dressing as women or women dressing as men, this always improves the point ranking of a show in my scorebook, no matter how well or poorly the scene or scenes containing the crossdressing are executed. In this particular case, however, it should be noted that I thought the crossdressing was pretty well done, at least on the cuteness and humour metrics.

The show also receives points for the presence of a cute elementary school imouto who is responsible and caring beyond her years and cossets the protagonist like a child. Every protagonist should have one of these.

Androphobia also earns any work some automatic points. In this case, however, the androphobia is inextricably linked to the protagonist getting beaten to a pulp, which is frightening and detracts points. Though humourous to the extent that violence and injury are always funny, the viewer more or less identifies with Souta as the “normal” human male so it causes me to wince every time he gets beaten up. No harm no foul on this one.

But oh, look: RSS tells me that Hansaet beat the Japanese encoders again and episodes 12 of Penguins is out. Now to quit wasting time writing about this average show and watch that fabulous show. FTTH sure has made me impatient.