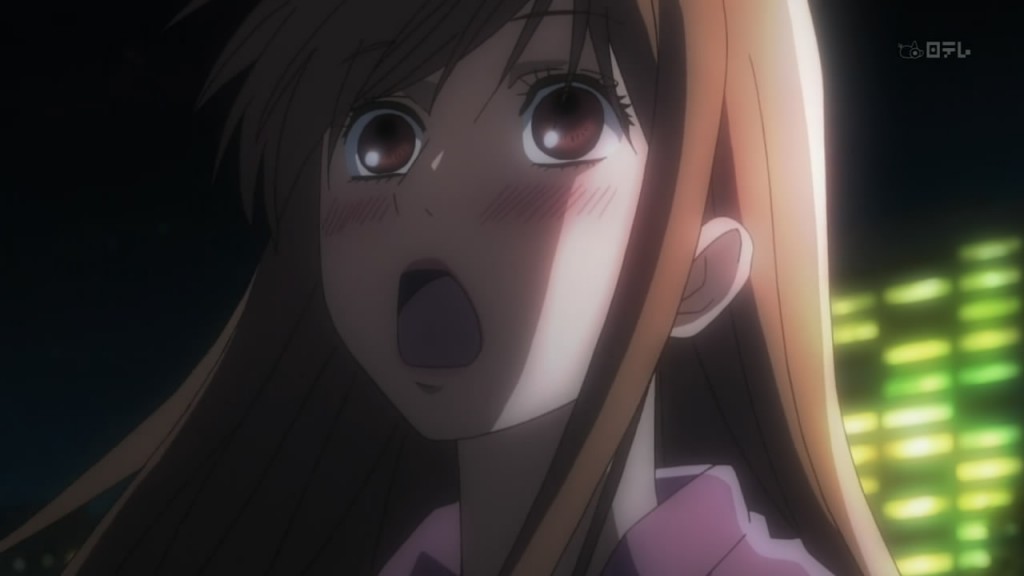 I took this screenshot because I thought it would be useful for the next time I needed a good picture for one of those "I came" images but then I felt guilty using this show for that so I'm going to trail off now...

I’m such a hypocrite. I pretend like I’m some connoisseur of TV but I just watch whichever show has cute character designs, a catchy gimmick, or voice actors with whom I’m enamoured. Chihayafuru is appealing for most of the same reasons that watching Pokemon is and episode 09 really made clear to me why. The viewer is the protagonist, Chihaya, and looks forward to every episode/day in which opportunity is provided for her to overcome one of life’s obstacles, recruit a member for her club, increase her experience points, or get a kansetsu kiss from Miyano Mamoru. Episode 09 was the quintessential training camp episode in which the clubmembers go to the house of one of its members to practise. The protagonist’s variegated array of teammates, from the nerdy Tsukue-kun to the normal girl Kanade to the allstar bishounen Taichi, are all the viewer’s friends and it’s my relationship with them, not some fictional protagonist’s, that are slowly improving and bestowing significance upon my tender developmental years. It’s my aching otomegokoro, not hers. This isn’t healthy but it’s why we watch TV. It’s just more apparent in josei and kids shows than elsewhere that this is our motivation for watching. I nearly let myself watch Nana as a result of a similar need for vicarious emotional discharge but mustered up sufficient shame to avoid that pitfall just in the nick of time.

Neither the director nor the writer draw your attention to it quite as blatantly when it comes to gaining experience points in the real world. I did laundry today but I don’t feel like my competence level as a human has increased all that much for it, nor do I feel the sense of satiety or completeness that gets underscored at the resolution phase of each story in shows like Pokemon and Chihayafuru. Problems arise, tension builds across an episode or several but, eventually — and most importantly before the viewer falls into despair from beginning to perceive the show as a “downer” and risk dismissing it on those grounds — the problem gets resolved and we all feel that we’ve overcome one of the hurdles of childhood and we’re one step closer to fulfillment, maturity, and satisfaction. In TV World everything happens for a useful reason; each time we resolve a problem we get noticeably better at life. Our skillset gets filled out, our minds expanded, or our hearts opened to something new. It’s an enjoyable experience because TV concentrates this development into a few short minutes at the end of an episode instead of allowing it to take the more diffuse, less noticeable form it manifests itself in in daily life, a form nowhere near dense enough to function as the emotional payload of a TV episode.

But just like caffeine, prolonged use means I’m needing this in ever larger doses. Real life wasn’t cutting it from the beginning, but now even TV isn’t saccharine enough for me. Chihayafuru and Tamayura Hitotose are but I don’t know what I’m going to do next season. I’ve been watching a lot of Sekai Meisaku Gekijou lately because they exclusively adapt stories that fulfill the above formula. It’s not enough though and on a practical level, I can’t buy from Yahoo! Auctions and not all of the seasons are available on Share. Ghibli is good for honeyed fairy tales, but I’ve used those films up.

Industry, do you hear me? Forget robots, explosions, and sport shows; spin more syrupy accounts of growing pains that I may watch from under a snuggly warm blanket with my wet sleeves and carton of melancholy flavoured ice cream.

because they’ve added an “Independent Film” category to the On Demand selection after I complained about the lack of one. Credit must be given where credit is due.