Now that the question of which shows are being simulcasted, which are unlicensed in U.S., and which are being oversubbed is more or less answered, I can enjoy these shows without worry because I now know that even the shows that are being simulcasted have groups working on them other than HorribleSubs. It does make me feel slightly guilty about downloading licensed shows, but meh, I’d even prefer to watch raws, pausing every few sentences to look words up in the dictionary rather than pay for legal anime that’s been professionally translated…if it comes down to that. In the meantime, I’ll enjoy this peculiar situation that’s been going on for the last year or more where few people seem to care if shows are licensed in R1, since it sure seems unlikely to last more than two to three years before some Kazaa-esque debacle goes down and some 12 years old boy gets sued for downloading Densetsu no Yuusha no Densetsu (I wonder if this sounds as stupid in Japanese as it does in English…).

But Usagi Drop is still great. It doesn’t make me less of a man that the shows I enjoy most are primarily mushy, touchy feely shows where characters grow, learn, and forge strong bonds with friends or family and learn the value of the intangibles in life. Indeed, I’d go so far as to say that the fact that I watch shows targeted at little girls and women just shows how unshakably confident I am in my manliness, that it is not reduced an iota by biting at all the old tricks used to garner emotional investment from viewers is a testament to its might. It would be more correct to say that it’s actually increased by such willingness to easily succumb to more or less entirely visceral appeals for my sympathy.

I love how the viewer gets the feeling that Rin is the one acting as the parent, at times leading Daikichi both literally and figuratively, rather than the other way around. Simultaneously, we're shown just how much of a kid she really is, despite her hardiness and maturity for her age, when she becomes too embarrassed to be seen being carried on his shoulders in front of other children.

That’s not to say that there’s not good reason for the viewer to feel sympathy for Rin. Putting aside for a moment the fact that she’s completely adorable, the figure who has acted as her parent for most of her life is gone, she’s thrust into an unfamiliar environment in which it’s made quite obvious to her that she’s an undesired intruder, and, to top it off, Daikichi is not the most traditional of parental figures one can imagine. Lots of terrible, tragic things have happened to her so my urge to kidnap her and keep her here in my home so that I can hug her any time I want to is not entirely unreasonable, even without the cuteness.

But all thought of the plot aside, she’s very cute. This is good. I like it. It could have been annoying, but the repetition of Rin waking Daikichi up, instead of the other way around, as we would expect to be the case with a responsible parent, was effective. When Daikichi reverses that pattern by waking her up at the end of this episode, the viewer is supposed to get this rising feeling in his or her chest, like “Awwww…ickle Daikichi’s growing up. Maybe things will be okay now”. That didn’t quite happen to me, but it worked well enough. It’s a gutsy move doing repeated scenes like that, since it could fail horribly and simply prove irritating and heavy-handed. This did feel a bit immoderate, but not so much that it felt unwatchably clichéd.

Awww; the phone is as big as her face!

The best part of the episode was while Daikichi was at work and Rin was at school and the scene kept switching between the two. The sense of sameness between Daikichi, working hard at his job, and Rin, working hard at nursery school and just being a kid in the face of all the horribleness that follows her about, is expressed without words, a good example of not laying it on too thick, as it were. At least I didn’t think it was too sickeningly blunt. It’s not too subtle though and you can’t really miss the big blinking sign that goes off and reads “Hey viewer! Look! They’re both growing!” but it’s still a reasonably reserved episode, maintaining the mellow pace that I found so attractive in the first one. It’s good to see Rin making friends, but then sad as their parents pick them up, one by one, leaving Rin alone eventually as she waits for her workaholic guardian.

I was often in Rin's situation in preschool, stuck spending time alone with teacher, waiting for someone to pick me up. Having a nice teacher helps.

Finally, I like the nocturnal enuresis thing. It’s not often that the topic is broached on TV. During the first episode I thought of the sleeping arrangements and said to myself, “Oh boy! There’s bound to be some urine jokes in this show”. Well not only was I right, but I didn’t even have to wait very long! A urine scene in the second episode! For Kiss x Sis we had to wait five whole episodes for this. 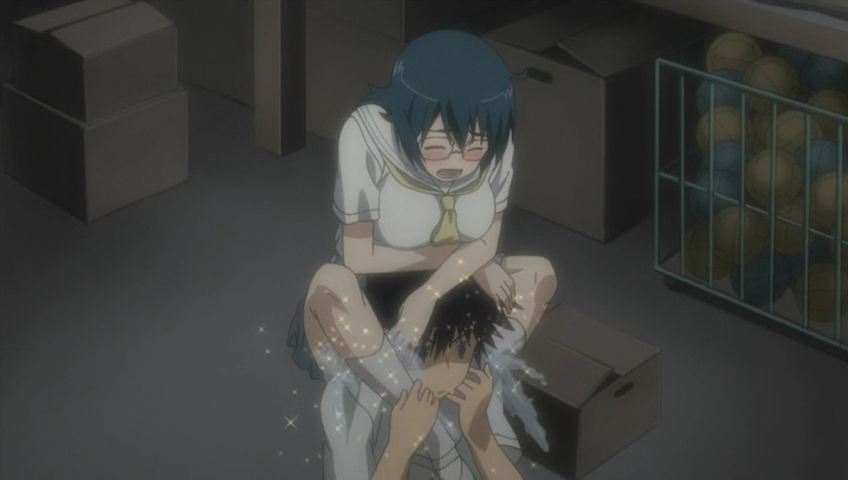 I'm OK with this.

This ranks up there with Mitsudomoe and Fight Ippatsu! Juuden-chan!! in terms of how prompt the onset of pee jokes is (episode 2 for all three shows). 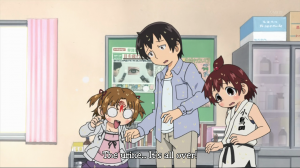 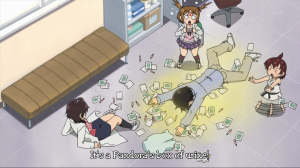 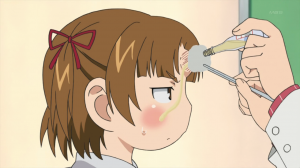 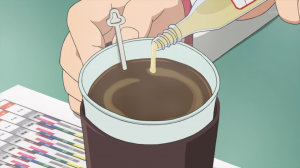 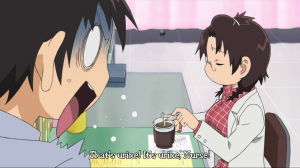 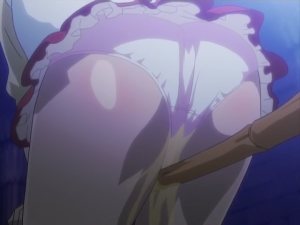 Ah yes, no matter how old I get, pee never stops being funny. 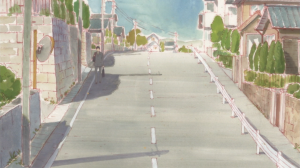 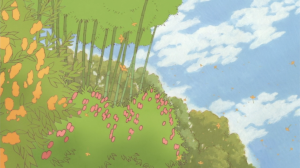 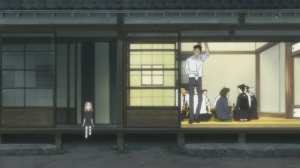 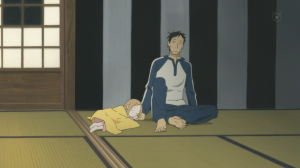 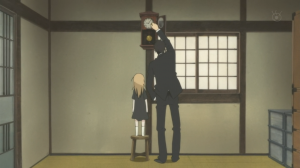 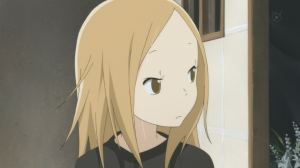