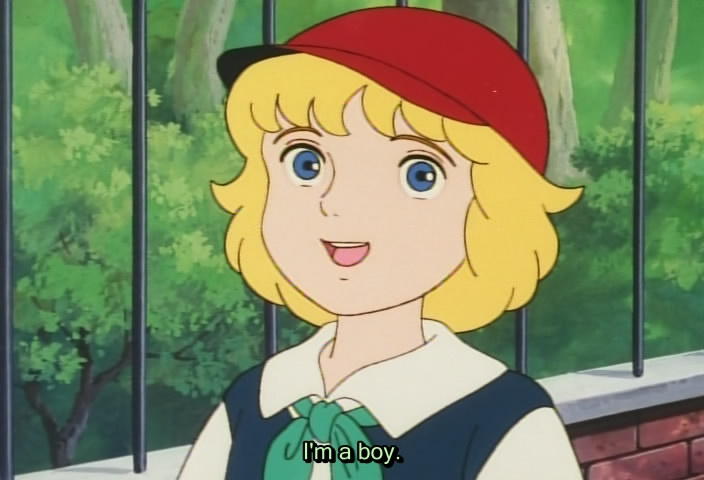 I like Shoukoushi Cedie very much, which was surprising to me since I usually don't go for family-oriented shows unless a cute orphan girl is the protagonist, which, as it turns out, is the case often enough that I actually end up watching such shows frequently. Cedie proves though that it's not just traps and ludicrously optimistic orphan girls bereft of their parents by whom I can be moesaserareta.

Because I’m not an encoder I rarely need full DVDs. The only time I do is when good raws are not available. Sometimes I get DVDs that I never watch. Sometimes I’ll get the first disc in a multi-disc series, intending to decide if it’s worth it to get the rest only after watching the beginning. The trouble is that these DVDs sometimes sit around for months or even more than a year before I watch them, by which time the rest of the discs are often unavailable. Sometimes the rest of the discs are never available in the first place, such as with はいからさんが通る and キャンディ・キャンディ, neither of which ever had official Japanese DVD releases as far as I know.

I’ve got the first four discs of Shoukoushi Cedie. A nice bonus about the DVDs are that it’s one of the few series to have Japanese subtitles, which, other than subtitles in your native language, are about the most helpful thing in the world when, like me, you don’t speak the language in which the dialogue is spoken. All DVDs and Blu-ray discs should have subtitles in my opinion. I usually turn the subtitles on when I watch movies or TV shows in English, too. I just prefer being able to confirm what I think I’m hearing by reading it simultaneously. Either that or my English is even worse than I realise it is.

The problem is that I just can’t get the rest of the DVDs. I have similar problems with other shows that I’d like to watch, too. I want to watch 巴里のイザベル but I can’t find any DVDs. I can find it on Amazon, but the only two sellers who ship internationally on there, one with a new copy and one with a used copy, are charging JPY 30000 and 50000, respectively. The series is only 13 episodes. It should be about JPY 2000. Sometimes I see 13 episode series of relatively unpopular shows like this for JPY 500 on Yahoo! Auctions.

I wanted to watch さすらいの少女ネル very badly at one time. I looked at Amazon and saw that the only seller who ships internationally was selling a used copy of the DVD box for JPY 60000. That’s nearly USD 800. This is almost as ridiculous as the price for the Card Captor Sakura special Blu ray box set that came out recently. Yahoo! Auctions is a bit better, but I’ve only seen copies of the show on there a couple of times for JPY 10000 to 20000 and none of the sellers would ship internationally. With a proxy service I’d still be looking at USD 300+ for a lousy DVD of a feel good kids story based on a book I could buy for USD 2. Thankfully ARR released rips. I love ARR.

I was looking for at least two years for a copy of the 野ばらのジュリー DVDs. There’s only four of them. It’s a short series. Someone finally made them available, by the way, but this was another series I had considered buying because it was so rare in digital form. If I had, I’d be out JPY 49000.

These aren’t even World Masterpiece Theatre shows. Those are more expensive. They don’t release DVD boxes that contain the entire series for those shows; they release a “complete version” which condenses the entire series into only a few episodes. These are actually relatively inexpensive, but why would I want them?

One show that I’ve mentioned I really like before is 風の中の少女 金髪のジェニー which is loosely based on Stephen Collins Foster’s childhood and did not, I repeat not, make me drag my morose, inconsolable Sunggie-clad self out of my desk chair, and drape myself in a comforter as I groped about in the dimly lit room for my weeping companion teddy bear Sniffles because he knows the telephone number for the Tennessee Valley Authority. That most certainly did not happen.

I did cry when I saw the price the same Marketplace seller at Amazon who had the above items for sale was charging for the Jeanie DVD boxes: JPY 64000 and 59000 for volumes one and two. That’s 1579 dollars! Of course, nobody will purchase these items. It would be much cheaper to buy from sellers who do not ship internationally and use a shipping proxy in a case like this, but even if I did, I could expect to pay more than 200 dollars. Maybe that’s reasonable for some people, but it’s still too high for to make it practical for me.

There are other shows I want, too. They all cost too much money though. Proxy shipping services are impractical for low value items like DVDs, but I must either use such a service or pay hundreds and hundreds of dollars for these DVDs from the few sellers who do ship internationally.

This is one of the ways copyright infringement by duplication via Internet can be rationalized. You may think it’s immoral to duplicate some DVDs without permission and then proceed to enjoy them for free. But then, when you see that it would actually cost around USD 500 for many of these series, some of which are unpopular and short, you may no longer think it so immoral. Shoukoushi Cedie is a Sekai Meisaku Gekijou series and has 10 volumes, each of which are about JPY 3000 for domestic buyers. That’d be JPY 30000 for a domestic buyer. If I used Shopping Mall Japan service I’d pay an additional USD 35 plus various other fees for an order like that, not to mention domestic shipping and international shipping, which is always expensive with Japan Post. On the one hand I understand that international mail needs to be expensive because the transportation, inspection, and other costs are very high for any type of postal system, but I’m used to USPS prices. I can send a book from New York to Guam for USD 3.50 and probably have it arrive in less than a week. 30000 Yen is about 400 dollars, plus 35 dollars, plus a few dollars for domestic shipping, plus about 30 dollars for international shipping, plus a few more dollars for other fees, and you’ve got a pricetag of nearly 500 dollars for used DVDs of a show from the 1980s. When I think of it this way, I can’t really think of duplication of such DVDs as immoral.