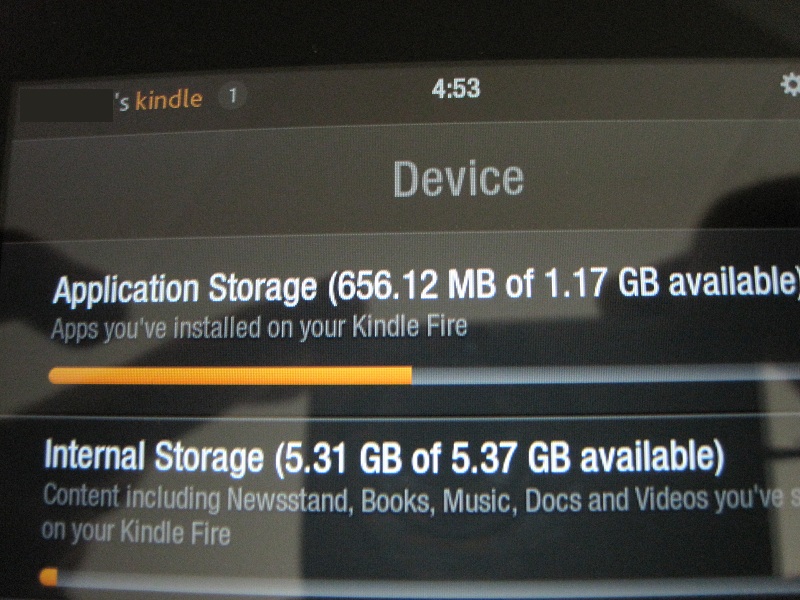 What a waste of an e-reader.

Note that I actually wrote this thing in late October 2012 and forgot to post it after, you know, getting my ass handed to me by Sandy. I checked my records and it looks like October 22nd was the day I got the Kindle Fire. That means I had a grand total of 7 glorious days to play with it.

I’m perpetually a generation behind. As is my wont, I went ahead and purchased a Kindle Fire the other day, shortly after reading about it’s successor, the new Kindle Fire HD. I have a Nook Color on which I run Cyanogenmod 7 and love it, but I found a good deal on a Kindle Fire listed as “bad battery” on eBay. Well, it turns out the USB port is the problem, not the battery. The USB port must be coming loose from the mainboard because it won’t charge unless it’s held in a certain position. Presumably this is why the seller took it to be a bad battery.

In any case, though I deny all accusations of being a stalker, I do enjoy the sort of voyeurism purchasers of used tablets are given opportunity to enjoy. The previous owner of the last tablet I bought seemed to use the device for nothing other than logging into his profiles at multiple online dating sites. Other than a few shirtless pictures of what I presumed to be him taken in front of a mirror using the built-in camera, there were hardly any multimedia files on the device at all. I checked the man’s email (which he had neglected to log out of) and found that he used it for nothing other than dating sites. He had even received via email nude pictures from a few ladies. He left himself logged into Facebook, too. I had a look at some of his friends’ profiles but got bored quickly. There weren’t any naughty or incriminating pics. Nonetheless, there was enough information available to me so that I could have found out where his house was and gone to kill or burglarize him had I had the mind to.

So it’s a fun thing to do, snooping through the stuff left on pre-owned devices, that is, not killing people. Of course, I always restore to factory settings after getting bored perusing the previous owner’s emails and other personal information and it should go without saying that I’d never actually reveal information that could be used to personally identify the previous owner or take advantage of it, since I’m an ethical sort of person. But I certainly could, if the mood struck me.

It’s both funny and a bit frightening that people don’t take the precaution of removing personal information from devices before selling them or giving them away. Sometimes it’s understandable, such as in the case of tablets with cracked screens. But other times, such as with this Kindle Fire or the shirtless man whose email I was able to read, there’s no explanation other than carelessness. On the other hand, most people, I would hope, even if given the opportunity to log into the previous owner’s online accounts, would take the high road and refrain from doing anything naughty, instead simply chuckling privately at the previous owner’s quirks and vices and then promptly wiping the device. 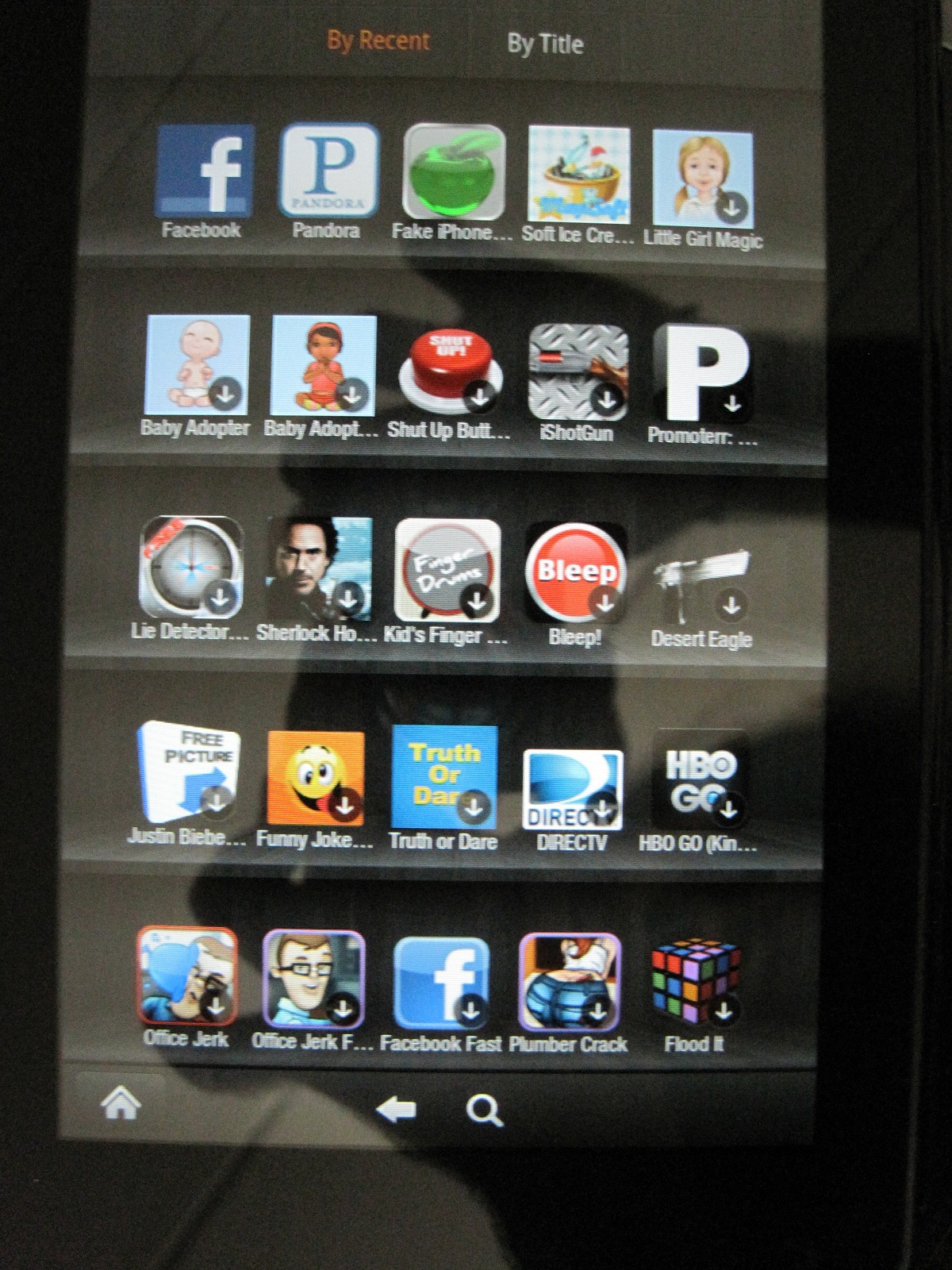 Pages and pages of novelty apps.

When you buy something like a Kindle Fire, you expect there to be some books on it. My generation 3 Kindle keyboard had lots of books on it when I got it, including Fifty Shades of Grey. Incidentally, an e-book reader is the best way to read a book you’re too embarrassed to be seen with. This Kindle Fire is well-used yet there’s not a single book on it. The reason I know it’s well-used is because of all the non-book shit left on it. There’s several hundred megabytes of useless apps on here. There’s a baby adoption app, ice cream shop simulator, daily joke, truth or dare, child lie detector, and something called “Fake iPad” which, when opened, simply throws up an image of an iOS screen to make your tablet look like an iPad. There are pages and pages of apps like this. Almost none of them do anything useful.

Out of the countless apps on the device, there are only a few that I would ever consider choosing to reinstall after I restore this device to factory settings and register it to myself. Pandora radio is one of them. Christmas is coming and I refuse to buy an entire album just to annoy my family with Wham’s “Last Christmas (I Gave You My Heart)”. The previous owner and I differ in our taste in music though. I opened up the Pandora app (which logged me into her account automatically) and the sounds of ‘Lil Wayne immediately spread through the entire apartment because the previous owner had left the volume set to maximum. This, by the way, was my first opportunity to listen to the speakers of the Kindle Fire which, I was pleased to learn, are incredibly loud and clear. I’m not an audiophile by any means and don’t know the first thing about speakers so I’m not speaking from a technical perspective, but from a practical one there’s no question that they’re much better and significantly louder than the speakers in my Velocity Cruz PS47, T301, or Nook Color. Heck, they’re actually a lot louder than the speakers in my Acer laptop, although part of that problem is a less-than-ideal driver implementation in my OS. After being blown away by the volume of the speakers I tapped the back arrow in the Pandora app to see if there were any other stations that the previous owner had created. There were seven or eight others featuring artists I’d never heard of. There was one with a name that I did recognize though and that was the Justin Bieber station. 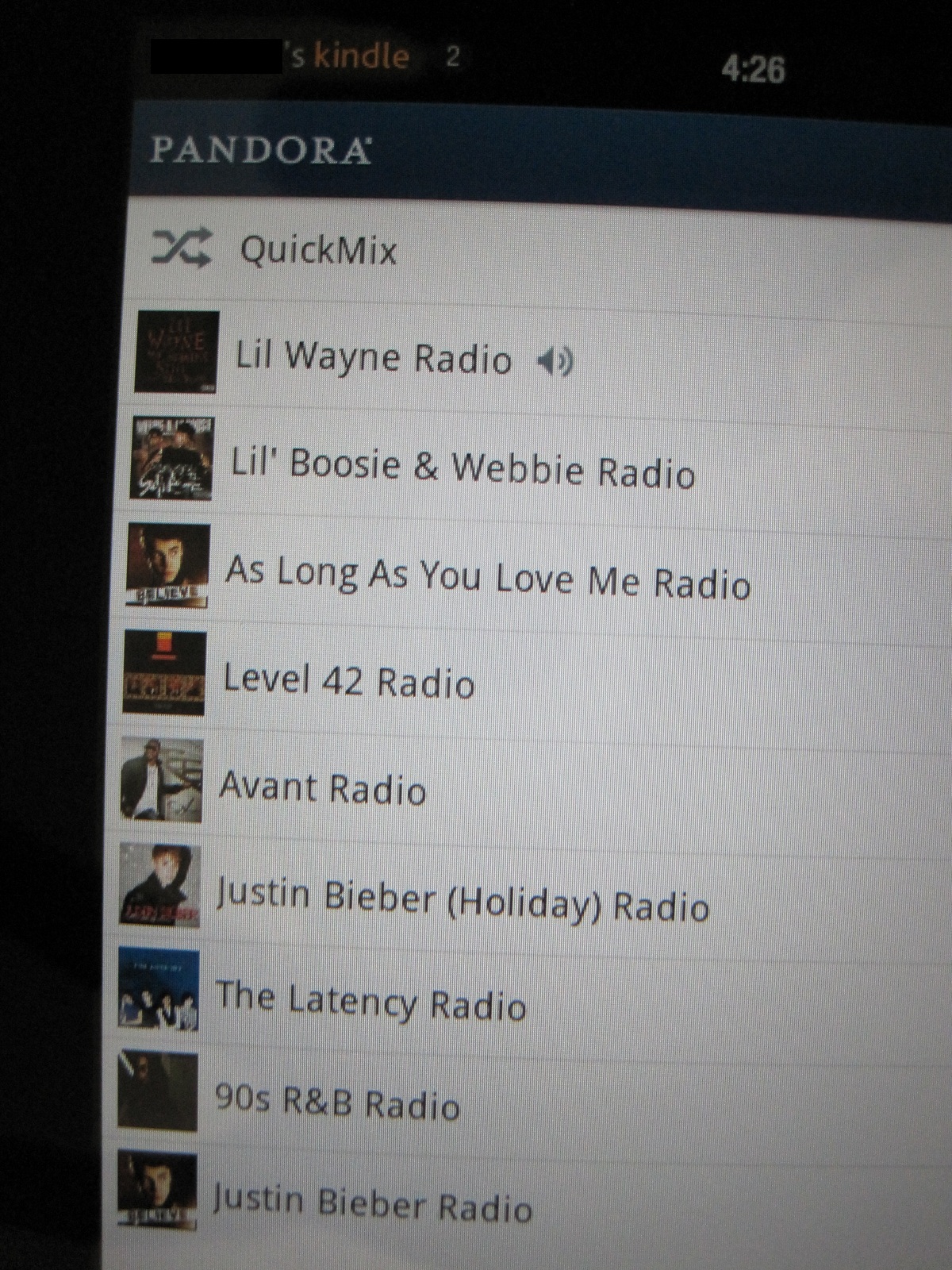 It’s not exactly my intention to ridicule (although that is always fun), but I can’t help but find it peculiar that someone would buy a Kindle Fire just to listen to Justin Bieber and play the ice cream shop simulator app. The previous owner was still logged into Amazon.com so I decided to check her recommendations. Interestingly, as far as I could tell she had never purchased physical goods from Amazon. She had purchased dozens and dozens of apps and had lots of recommended apps, but no matter which category of physical goods I clicked on — even music — Amazon reported that they had no recommendations, which is most likely because the previous owner never actually bought anything other than digital goods.

Of course, on the one hand I am very much a believer that every person ought to spend his or her money and time as he or she likes, particularly if it doesn’t harm anybody else. So it’s fine with me if someone wants to buy a Kindle Fire and never read a single book or periodical on it. It just seems to me though that if the chief reason you’re buying the tablet is to kill time with apps and listen to music, then why buy one marketed as an e-reader that lacks access to the ordinary Google Play store and costs $199?

Meh, probably the same reason I need four tablets and an e-ink Kindle.

I must conserve my bandwidth until I get FiOS again. Watching only one or two shows this season is a good start. I am a man of simple taste and this bird pleases me. Therefore, Tamako Market is my show this season. Not that that necessarily means I’ll ever mention it again or anything…