…with all these panoramic shots of big landscapes, repeating geometric backgrounds with lots of straight lines, right angles, and characters tilting their heads to the side with their faces half-covered in late afternoon shadow. 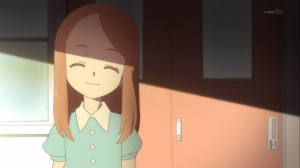 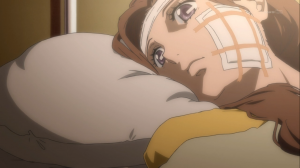 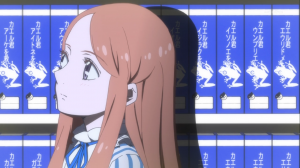 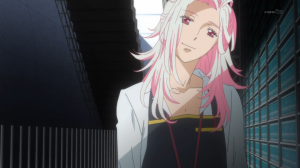 Sora no Ana…I saw that movie. It took place in Hokkaido and was pretty mellow as I recall. 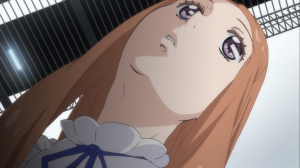 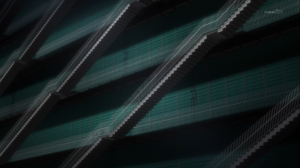 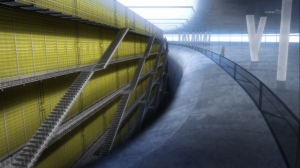 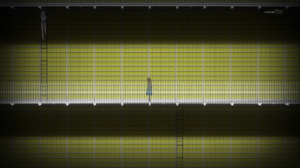 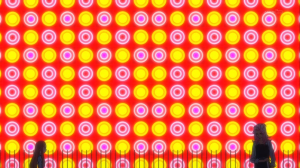 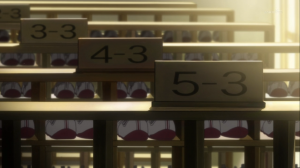 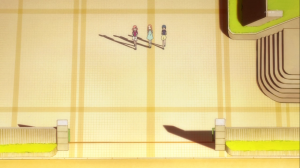 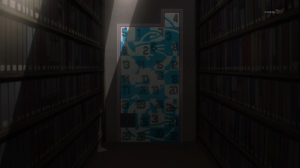 I had one of those sliding puzzle things when I was a kid. Coincidentally, instead of numbers, it had a picture of a penguin that you were supposed to construct by sliding the pieces around. It was pretty aggravating until I figured out that I could pick the pieces off the board using my fingernail and then reattach them in the proper positions.

Looking like Bakemonogatari is a good thing though. The whole episode was just such a pleasure to look at. Although I kept thinking of Bakemonogatari throughout the entire episode, it still had some of the familiar theatrical elements in it that have been present throughout the series, such as spotlights and other lighting effects that make scenes look as though they’re on a stage before an audience. 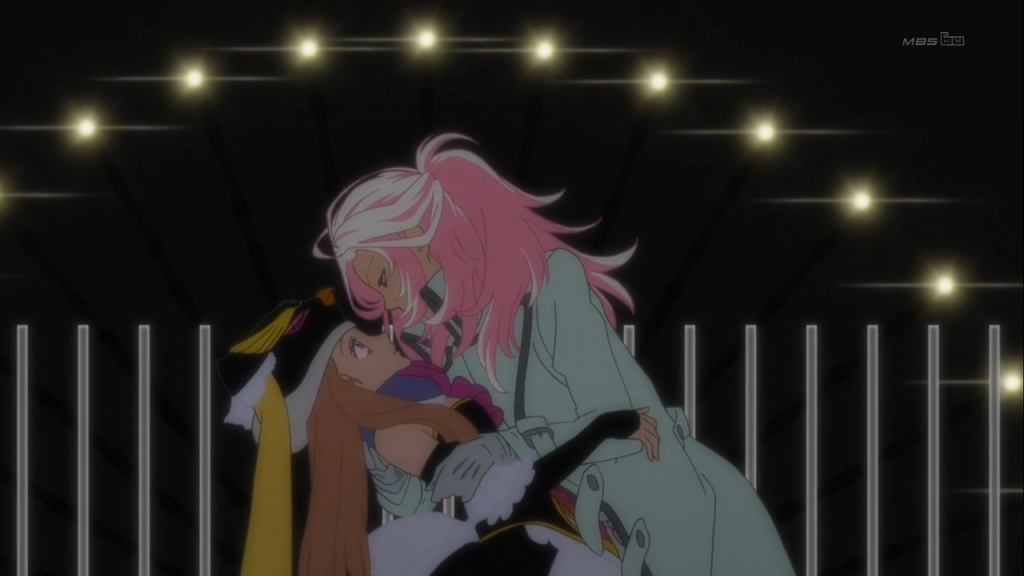 Unfortunately, also like Bakemonogatari, this bara — I mean unmei — no hanayome stuff makes it clear this show will now be denounced by those pesky foreign feminists as guilty of sexualizing children. Maybe Antonin Scalia will solidify his place as the Justice about whom I have the most conflicted feelings and defend media like this as he’s done when it comes to similar concerns with video games. It feels so peculiar liking that guy.

But I am disappoint. I bought it in “as-is” condition on eBay. Here’s the “before” picture from the auction page: 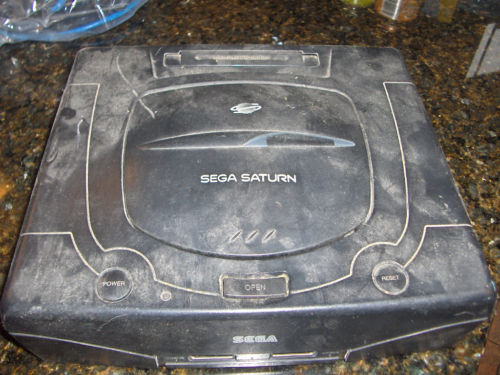 It was homely, to say the least. But here’s what it looks like now that I’ve had a chance at it: 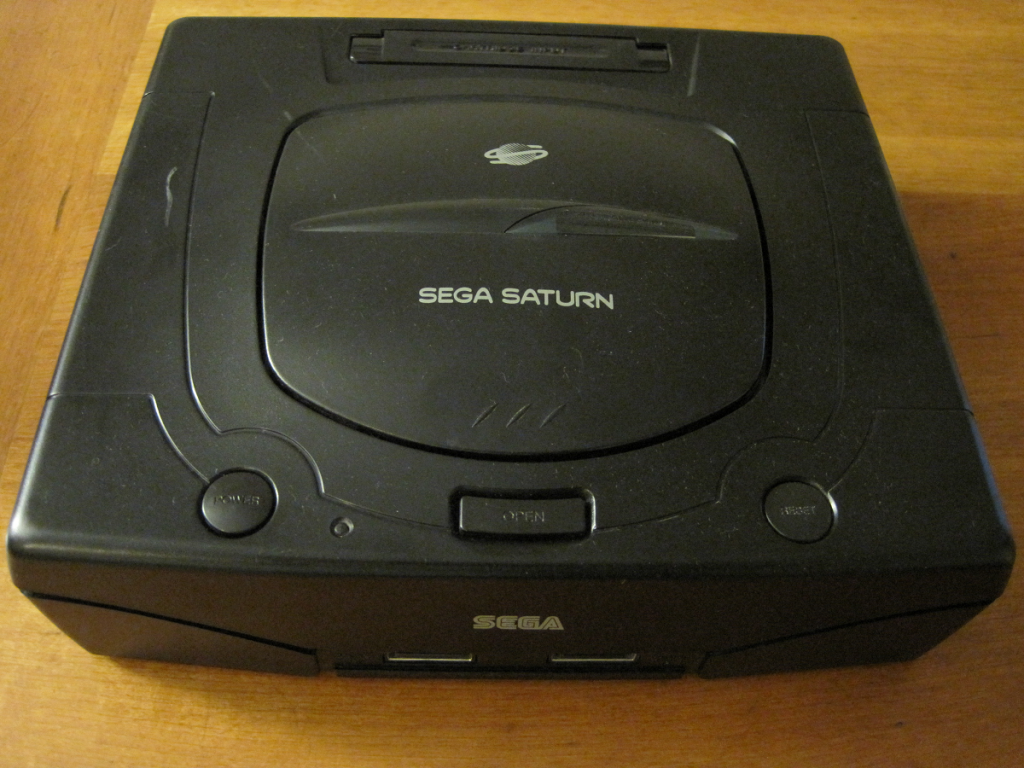 Obviously, I wouldn’t have purchased the system if I was sensitive to aesthetic issues like the appearance of the console, but I was, nonetheless, curious as to what proportion of the imperfections visible in the “before” picture were just dirt that could be cleaned away and which were actual scratches. I was happy to find out that there are really only two actual scratches of any significance; everything else was just dirt, stains and even what looked like bits of paint, all of which were easily removable with typical household cleaning products, lots of isopropyl alcohol, and considerable elbow grease. 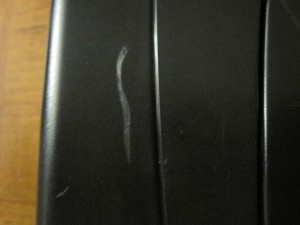 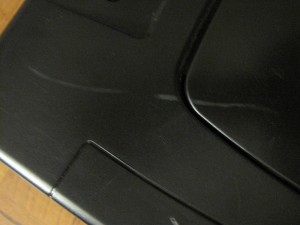 I have mixed feelings about buying badly worn-out consoles or other electronics. On the one hand there’s no feeling quite like taking something that’s been well-used or even downright poorly taken care of and making it look like new, or at least as pretty as possible. It’s an extremely satisfying feeling. On the other hand it’s very hard work cleaning these things and I sometimes wonder if I would be happier to just buy items that are already in decent cosmetic shape, saving myself the work.

Cleaning up used controllers is especially hard work. As for the Saturn above, I used cotton swabs and toothpicks dipped in alcohol to clean out the indented areas, such as the letters on the “Reset”, “Power”, and “Open” buttons. The rest of the cleaning work could be done with paper towels and cotton balls, since there are relatively few fine spaces. I did clean the inside as well though and for that I had to use cotton swabs, since I didn’t want to damage anything. Cleaning the inside might have been overkill though. Although it really was pretty sticky underneath the disc drive cover, almost as though someone had spilled juice in there or something. The point though is that there aren’t too many narrow areas or grooves where you need a tool with a thin point to clean. Controllers, however, have all sorts of little tiny areas that need to be cleaned with toothpicks or straightened-out paperclips dipped in alcohol. Even with tools like that, however, it’s tough to make sure you’re actually removing the dirt, crud, and gunk from the grooves rather than merely pushing it around and causing it to accumulate into lumps at the end of the groove. Also, certain indented letters are easier to clean than others. The letter “O” is very easy to clean since it has no corners. A letter like “E”, however, is very difficult to clean since dirt gets stuck at the many corners and ends. Cleaning controllers is satisfying work, of course, but it’s even harder than cleaning a console or other large electronic device.

The ease with which the console could be cleaned made me happy. Furthermore, the reason I am disappoint is not that the system doesn’t work; it does, in fact, appear to be fine, despite the typical veiled meaning of the phrase “as-is”. I’m disappointed because I bought the thing without any accessories at all: no controller, games, or cables of any sort. I knew I could use more or less any power cord that I had lying about, but, to my chagrin, when it arrived I saw that the video cable required needed some kind of special connector which was not common to any other game console I had. I had to bite the bullet and purchase an S-video Saturn cable online for 13 USD. I had hoped a Dreamcast or Playstation RCA cable would have worked, but I was wrong. I suppose I should have done my research on that beforehand.

So that meant that I had to wait about a week before I could really ascertain if the console worked. I did turn it on, of course, but I had no controller or video cable so even though the green light turned on I couldn’t be sure that it was actually outputting video, let alone whether it could read game discs. 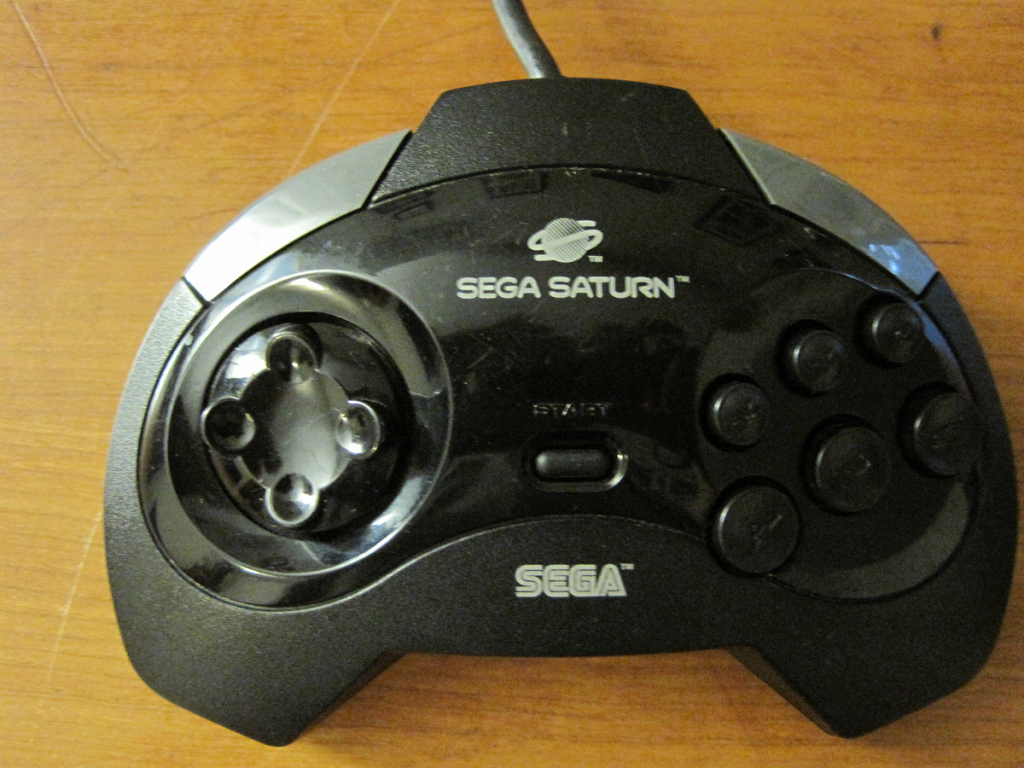 Silly me; I just had to go and get the standard North American controller

I intentionally chose not to buy a controller until after the console arrived. I wanted to make sure the console powered on before spending money on a controller. Once I knew that it did, at least, power on, I bought a controller before knowing whether it output video or played games. The controller arrived yesterday and the video cable arrived today. I’ve had the console for a bit over a week now.

I attached the video cable today and was so happy that it worked, that I immediately snapped a “victory” photograph of the thing outputting video. “This is it”, I thought, “this is the sign that it’s safe to drop the 30-something USD on a modchip that I want”. 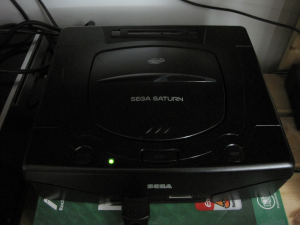 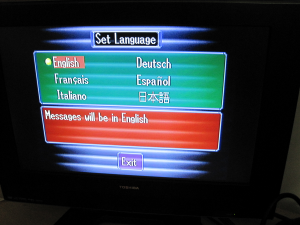 My heart was racing as I grabbed the controller. The thought flitted through my head that the fact that the Saturn was displaying the setup screen could be an indication that the save battery needed replacing, another cost I’d have to incur, but I was too excited to let that get me down. Slowly, with a sense of exaggerated solemnity, I pressed the A button to select “English”. I waited a moment, expecting something magical to happen. When nothing happened I thought that perhaps I had gotten confused, assuming that the A button had the “confirm” function, as it usually does on Nintendo games. I tried pressing Start, then X, Y, Z, B, C and A again. I tried the right and left shoulder buttons as well. I became frightened and tried combinations of various buttons simultaneously. I tried connecting the controller to the player 2 slot. I tried resetting the console, unplugging it from the power adapter, blowing on the controller connectors, and finally, I noticed the following devastating peculiarity in the controller connector: 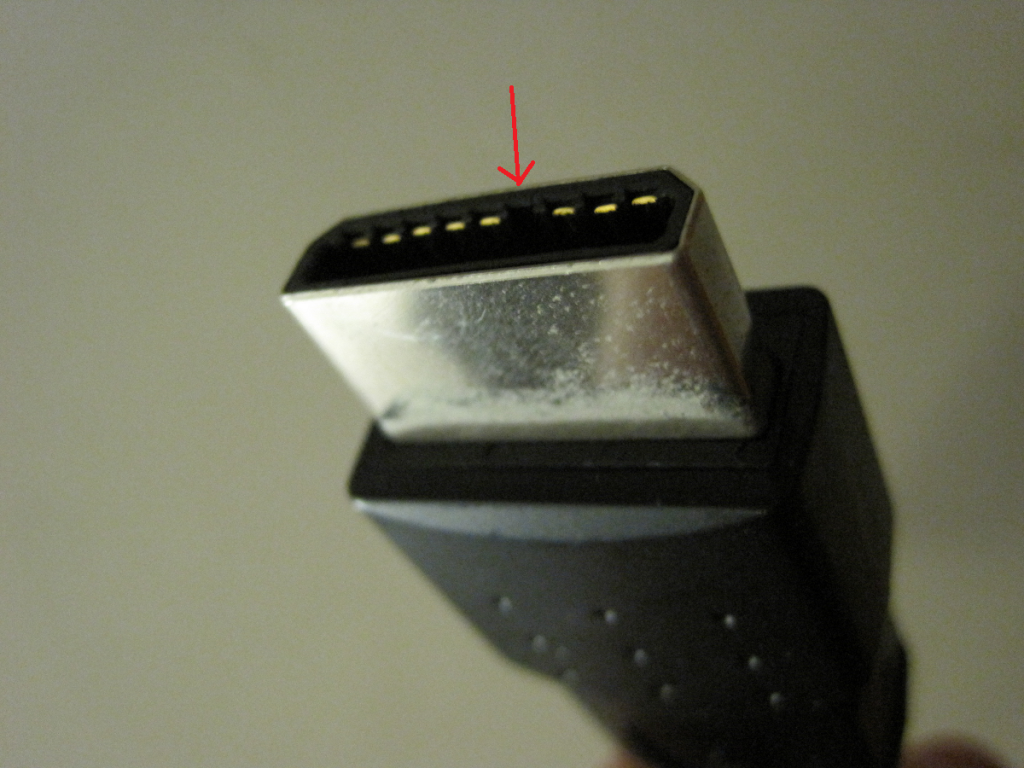 It was missing a pin. A quick Google search told me that Saturn controllers have 9 pins. This one had 8. Well, perhaps this was a special-edition controller that only needed 8 pins. That line of self-delusion was plausible to my frenzied mind. But if that was the case, the fact that it wasn’t working must mean the Saturn itself was broken. So I made the cheaper assumption and concluded I bought a broken controller. Stupid me.

I had had grandiose plans for this console. I wanted to buy a mod chip for it and do the region switch modification. I was going to amass a collection of original copies of only the greatest franchise-starting Sega Saturn games; the ones that went on to become legendary, like Lunar, Langrisser, Tengai Makyou, Panzer Dragoon, NiGHTS, and Sakura Taisen.

I really shot myself in the foot because, after long deliberation, I had chosen to pass up the opportunity to buy a 3D controller from a seller in Japan for 13 USD in favour of the regular controller I bought for 11 USD from a U.S.-based seller. I made the decision because I wanted to save the 2 USD and get the item sooner. The USA seller was someone I had never purchased from before whereas the Japanese seller was somebody from whom I had made many purchase in the past and knew to be quite reputable. But it was because of my impatience and penurious ways that I bought from the U.S. seller and got ripped off. To add insult to injury, the controller from the U.S. seller didn’t even arrive very quickly because the seller was located in Washington and I’m in New York, something like 4000km away and Hurricane Irene delayed all mail considerably. I really should have purchased the 3D controller. It looks more comfortable anyway. It looks a lot like the Dreamcast controller which, in my opinion, is one of the most comfortable of all game controllers.

Now I’m going to have to wait for the next time the seller that I like on eBay offers a Saturn 3D controller for sale. I won’t miss it the next time he sells one. Zettai ni…