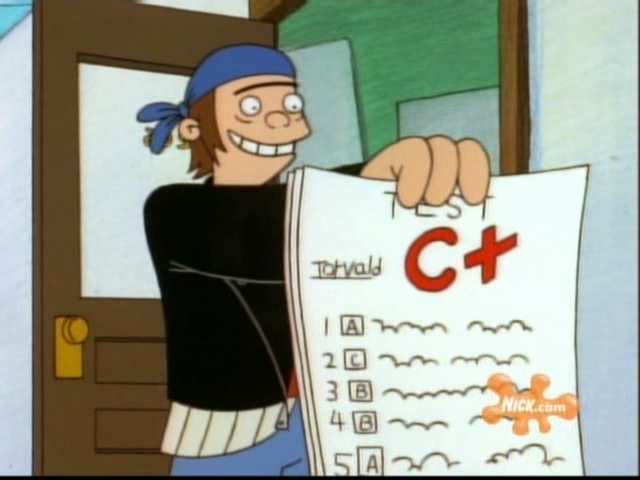 I quit anime again. Initially this was because I figured I’d be playing Skyrim right now but I’ve been embraced by one of my periodic waves of morality and decided that I will buy it instead. In keeping with that decision, however, I’ll now be waiting a year or so until the price decreases.

If I’m not watching anime or playing Skyrim though I have no real reason to keep writing anything. I never have anything interesting to say anyhow. I’m to media consumers as Takeru Kobayashi is to diners. I’m the least discerning viewer out there.

Calling someone a Type B anime viewer can have a pejorative connotation. I once maintained the delusion that I could claim to be a Type A viewer because I count series and films like Ghost in the Shell, Serial Experiments Lain, NHK ni Youkoso! and Satoshi Kon movies among my all-time favourites. But I can no longer delude myself about being a Type A viewer when I’ve also seen Okusama wa Joshikousei. I’m not a connoisseur, I’m a garbage disposal.

One of my guilty pleasures is watching Hoarders on television. This is a reality TV show in which camera crews and TV therapists exploit people who suffer from chronic disorganization and clutter in their homes. Some of these people are really hopeless nutcases who pose a danger to themselves and their neighbours, but others are just normal people who have too much junk in their homes. Part of the definition of a “hoarder” that the show employs is that, regardless of the type of item that the patient accumulates, it must be relatively worthless. Occasionally they profile people who do collect valuable items. They’re not hoarders; they’re collectors. I see an analogy between the behaviours of these people and my own omnivorous appetite for pandering, derivative, clichéd shows that rely on preexisting, done to death tropes rather than taking a leap and telling an interesting story.

If it weren’t for FTTH and my lack of ethics, I’d be the ideal consumer. I can easily imagine myself buying any Blu-ray with an attractive cover design, any video game with voice actors I like, and anything associated with a studio that produced a single franchise that I may have once enjoyed, regardless of how abhorrent their subsequent work may have been. I have no taste whatsoever. The only reason I can associate somewhat competently with people when they talk about anime masterpieces is because I watch everything. The principle of averages means that it’s inevitable that I eventually watch some gems with the kind of methodology I employ.

Having said that, I’ve stalled on one of the only two shows I’m keeping up with this season: Idolmaster. To my credit, I’m still watching the type A show, Mawaru Penguin Drum. The opening of this most recent episode reminded me of that famous painting which, proving to myself that I’m not a complete buffoon, I knew was by Seurat, though I had to look up the name, 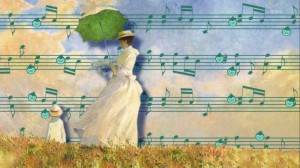 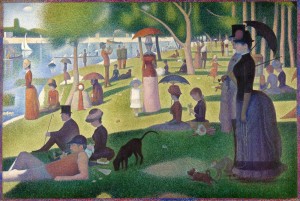 This show is great, but I sometimes find that, rather than strain my head to try and construct some understanding of the overall plot, I just say to myself, “Fuck it. I’ll give the show the benefit of the doubt that it’s profound”. The more abstract an episode is and the harder the narrative thread is to discern, the more likely I am to be impressed yet the less likely I am to understand why.

Figuring out exactly what I am supposed to be most impressed by is too much effort so I sometimes skip the drawn-out post-viewing contemplation session and jump ahead to the part where I just give the show credit for saying something incisive, deconstructing some taken-for-granted assumption about the social world, or challenging my preconceived notions about some social construct, even without knowing which cornerstone of my worldview has just been shattered. It could be all of them for all it matters. Something is certainly being chipped away at. It just remains to be seen exactly what.

As for my vengeance driven experiment, I’ll go ahead and try to resume that next week. I couldn’t very well count how many people were using electronic devices while taking exams. Incidentally, I don’t know whether I should do a facepalm or be impressed at the security-by-obscurity tactic to prevent forgeries used by the City University of New York on their official department stamps: 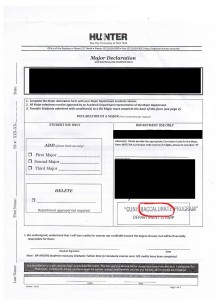 One more thing: child broiler? What is that? a German fairy tale?