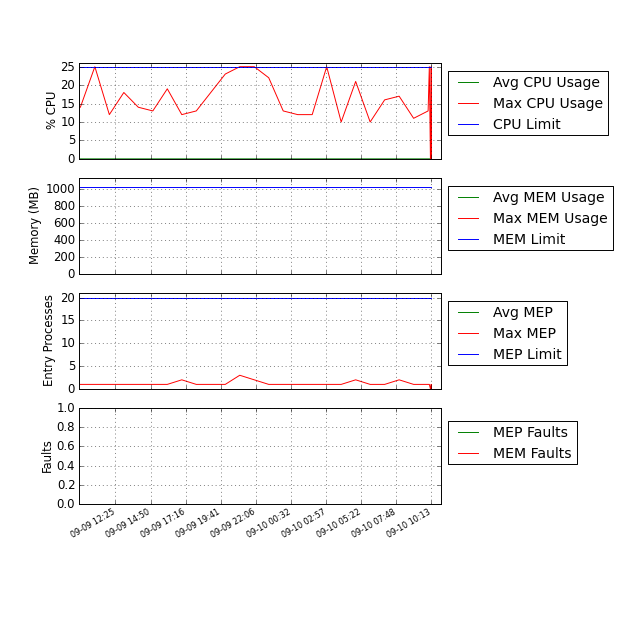 This picture is obviously old, but this is more or less what the graphs looked like for days

I’m not sure what’s causing this. I assumed that I got “hacked” again and that there were some malicious files somewhere in this website that I hadn’t known about. That wouldn’t have surprised me; this site is probably already in a lot of blacklists. I have to disable the Network Shield in Avast when I want to visit this site. Interestingly, it doesn’t bother me if I visit the homepage or access the site via FTP, but if I try to visit the WordPress dashboard or access cPanel, the alarm bells go off. I know some of those web-based tools in which you can type in a URL to see if it’s in any blacklists always say this site is associated with malware. robtex used to say that, but it looks like this site has been removed from whatever list it was in because robtex now says it’s not in any of the blacklists it checks in. All of that is well and good, but it didn’t answer what was eating up those CPU cycles.

Rather than fix the source of the problem I installed W3 Total Cache. That stopped the CPU spikes. I’m still worried though because I get absolutely no visitors other than bots from Google, Baidu, and Yandex so there’s no reason I should be using much CPU at all. I installed a fresh copy of WordPress, replacing everything except the config files I’ve manually edited. That should have put my fears to rest, but it hasn’t. While I was still worrying about all of this, the site went down for two days due to DDoS. I sure hope that’s not my fault. I just want everyone to get along. Maybe I’m just paranoid. As though that wasn’t bad enough, I noticed just now that my IP address has changed. Now I have to go and change some DNS records. I really enjoyed having my IP being with a 96. Now it begins with 71.