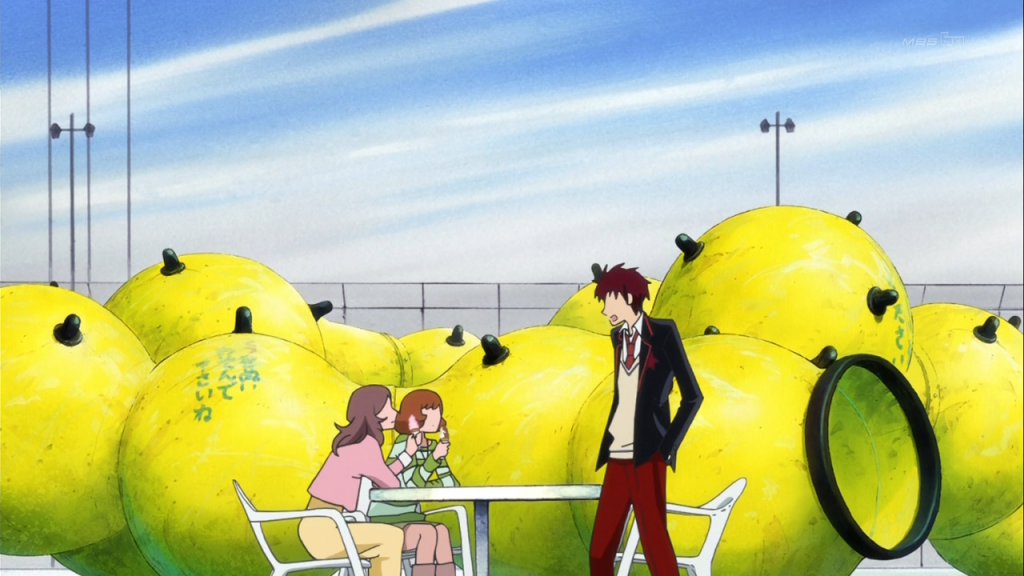 I’ve watched episodes 07 and 08 and now I’m more confused than ever. Part of the problem is because I’m used to watching simple-minded school comedy shows and overwrought shoujo bullshit that demand little attention to be paid. This show is a big transition from those genres for me. I’ve actually watched one or two episodes twice now, but I still keep forgetting which characters are which and how they’re related. This really demonstrates the scanty limits of my attention span because there are neither very many characters thus far nor are the relationships particularly complex. 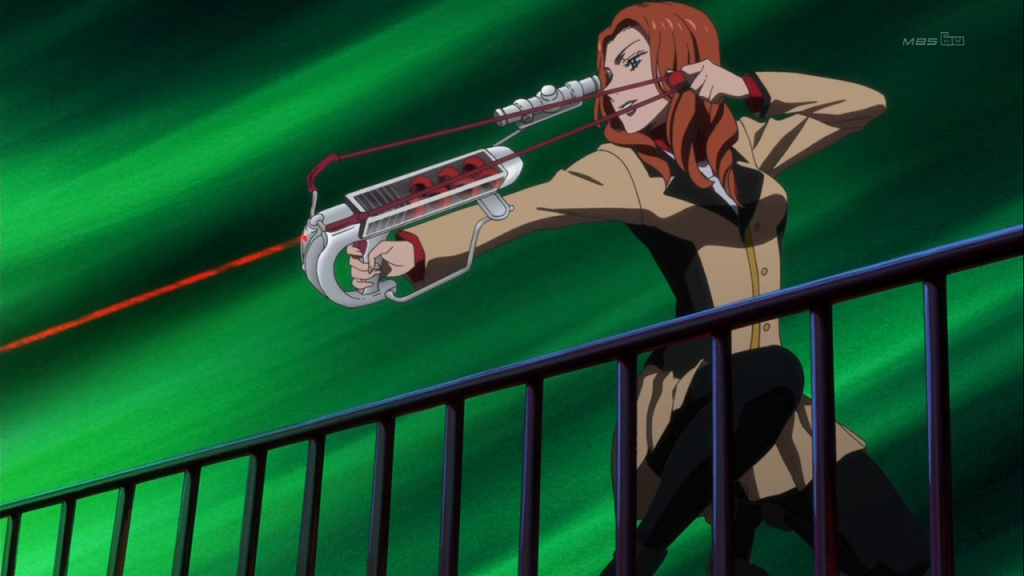 See? I can't even remember the name of this one, despite the fact that she's obviously a pretty important character

That said, the fact that I’m too feeble-minded to remember even the most prominent elements of the plot doesn’t stop me from looking forward to every episode. I mean, what the hell are these red ping pong ball things that the light-haired character is shooting at people? Is she like, turning them into zombies or something?

Zombies would actually be pretty cool. The last show with zombies that I watched was High School of the Dead, and that was less than completely satisfying. I just watched a show on the History Channel about Haitian zombies in which some self-styled “scientists” concluded that zombies are not only real, but they’re created by a very simple process of first feeding a normal person some tetrodotoxin that priests extract from a local type of fugu fish. If done properly, the person then becomes completely paralyzed, so much so that even western doctors can mistake the patient for a corpse. You then bury the person and, later, when the victim recovers, he or she will rise from the dead and be a zombie. Of course, the fact that the amount of tetrodotoxin that would kill a human, according to Wikipedia is a mere 8 micrograms, it seems rather unlikely that there will be any zombie survivors of this process knocking at my door demanding my scrumptious brains any time soon. But you can never be too careful, so I’ll still be sure to cover all my belongings, self, and home with zombie repellent. 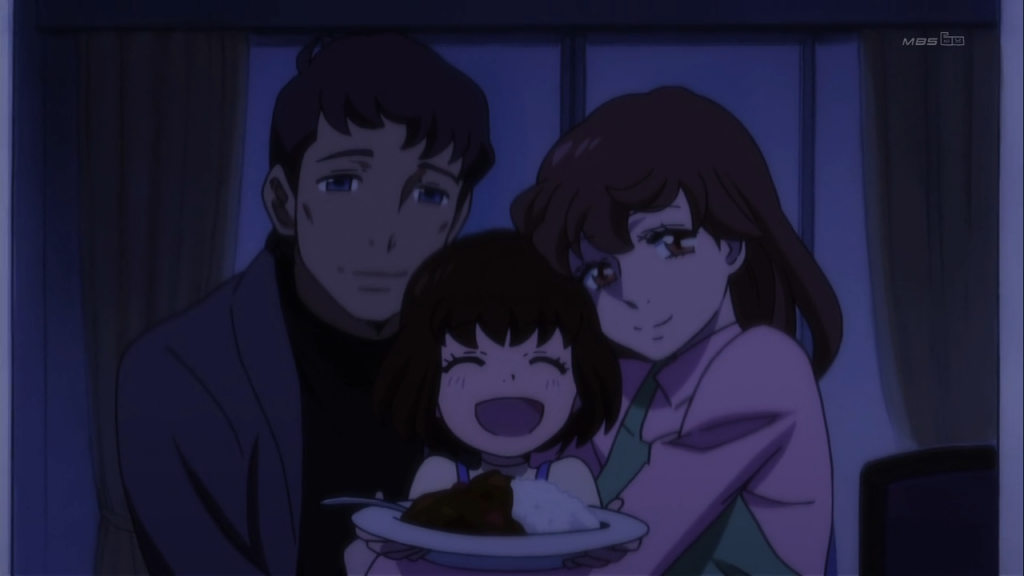 The segments about Ringo make me hungry because she's always reminding me of the "Happy Family" dish with shrimp, chicken and beef from the Chinese restaurant here.

I liked all the new revelations recently, such as how Ringo is adopting for herself and fulfilling Momoka’s fate in her stead. The way in which these, by all counts, extremely dramatic, even sombre moments are recalled in flashback with a high degree of absurdity and even some inexplicable humour are really are out there, like the scene about remembering Momoka on Ringo’s birthday in which the mother is a kappa and the father is some kind of teddy bear. Then the house is suddenly underwater and the two get attacked by an eel that reminded me of the big scary eel in the Jolly Roger Bay stage in Super Mario 64 that I was scared of when I was younger. 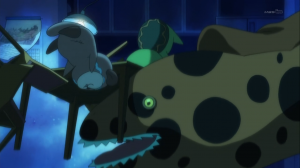 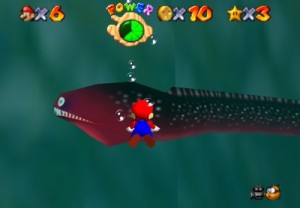 This also goes to further explain her delusions about — or rather fascination with — Tabuki and “Project M”, which, in light of recent events, we’re lead to believe stands for “maternity”. 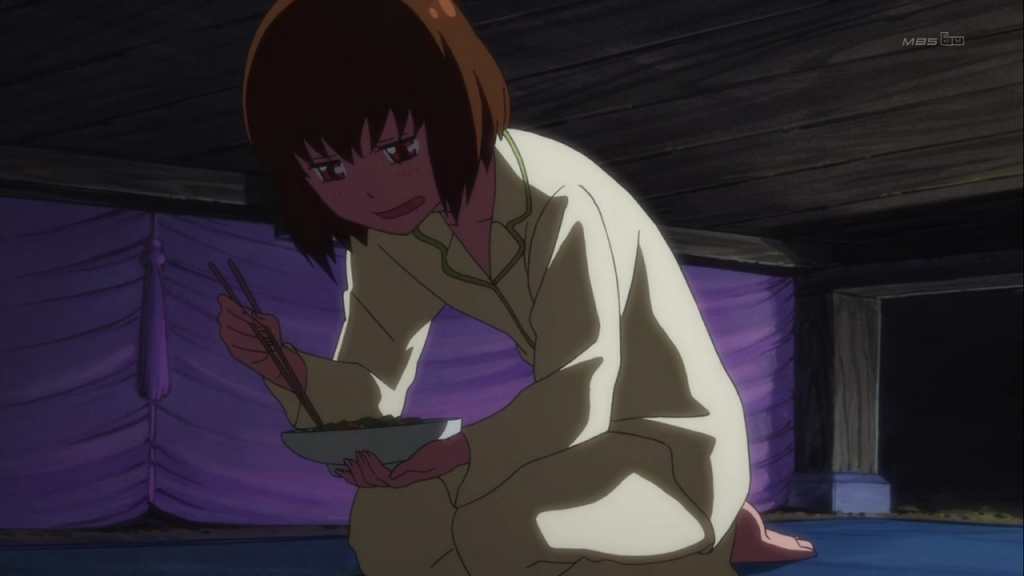 Ringo Oginome is really one of the more interesting characters in any anime in recent memory.

It was funny that what Ringo took for an invitation to a date actually had her end up going to watch the Curry Lady perform in her frilly Frenchy fairy tale story which Tabuki, of course, is profoundly moved by. Ringo’s imagination is as wild as ever. I like her imagining Curry Lady as a killer whale. 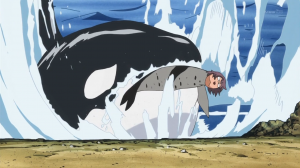 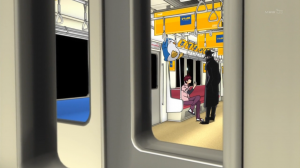 Stupid Curry Lady had to go and invite Ringo and Shouma to her frilly hoity-toity actor snob party. Poor Shouma gets ordered around by Ringo even at the party. What a cruel-hearted, malevolent, sadist of a whale she is, inviting Ringo to the party just to announce her stupid engagement in front of her. What are you trying to do, Curry Lady? Drive her to kidnap Tabuki? She’s liable to do it.

It does, by the way, look like I was correct about the Men in Black. They are up to something sneaky with those ping pong balls. Either that or the long hiatus has forced Don Draper to venture into the world of cartoons.

But the thing that really keeps me watching this show, besides the penguins, is the sheer weirdness of it all. There are very few shows in which miracle frogs are used to make love potion number 9 in a sauna. 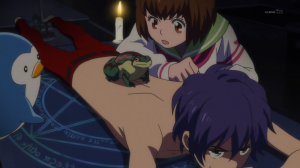 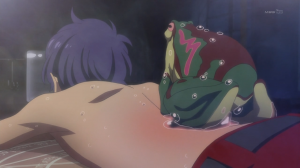 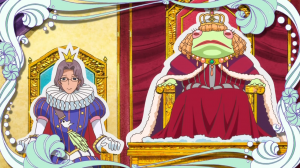 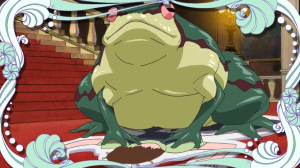 Then what’s up with that ending? Is Ringo no longer just your run-of-the-mill stalker but an actual rapist? That’s a pretty appealing thought, but it’s more in line with an eroge than a mainstream TV anime so I doubt things will play out like I started imagining them in my head…which is a bit unfortunate.