I mostly repair the older SNES revisions with 2 PPUs, but sometimes I do get 1-chip and Mini consoles. But basically my repair knowledge about those is nothing much beyond “clean the cartridge slot with alcohol, look for broken traces and if it still doesn’t work, toss in the parts box”.  Since they don’t have a CPU or PPU that’s prone to failure (to my knowledge, at least), it’s not like there’s much of anything I can replace on them.

Eventually I accumulated a small pile of 1-chip boards that all would freeze at the publisher splash screen. This is a common issue on all boards and is caused when the system fails to communicate with the sound hardware for whatever reason. You can easily cause this problem in SHVC consoles by simply removing the sound module. On other boards it’s usually due to broken traces somewhere.

When I find this issue on consoles without a removable cartridge slot and I can’t find broken traces anywhere else, I don’t waste my time and just toss them atop the heap. Among those boards are about a half dozen 1-chips, most of which I found inside housing that was full of roaches and had lots of liquid damage and broken traces. Though I had fixed all the broken traces I could find on the boards, they would all still hang on the publisher splash screen, so I made the assumption—which seemed reasonable at the time considering the condition in which I acquired them—that there were more broken traces that I simply hadn’t found, probably under the cartridge slot, and gave up on them.

Years ago when I first started repairing SNES consoles I had, in fact, tried replacing the DSP and S-SMP chips on some GPM consoles with this problem. Of course, it didn’t fix the problem and I later found the broken traces on them that were really causing the issue. Ever since then I’ve always assumed the audio chips are pretty much okay and don’t just die for no good reason like the CPU and PPUs.

But I was digging through my parts boards pile today and found those 1-chip boards I had tossed aside. Earlier in the day I had fixed a Mini when I removed the VRAM and found broken traces beneath. Inspired by that success I decided I should check underneath the APU on a few of them that had rust in that area to see if the traces that ran beneath it had breaks in them. So I removed the APU from a few boards and walked away while they cooled.

When I came back I looked for broken traces, didn’t find any, and then soldered the APUs back onto the boards. But just for the heck of it I decided I would replace the APU in one of them with an APU I had salvaged from a trashed board. To my great surprise the problem was solved when I tested the board. 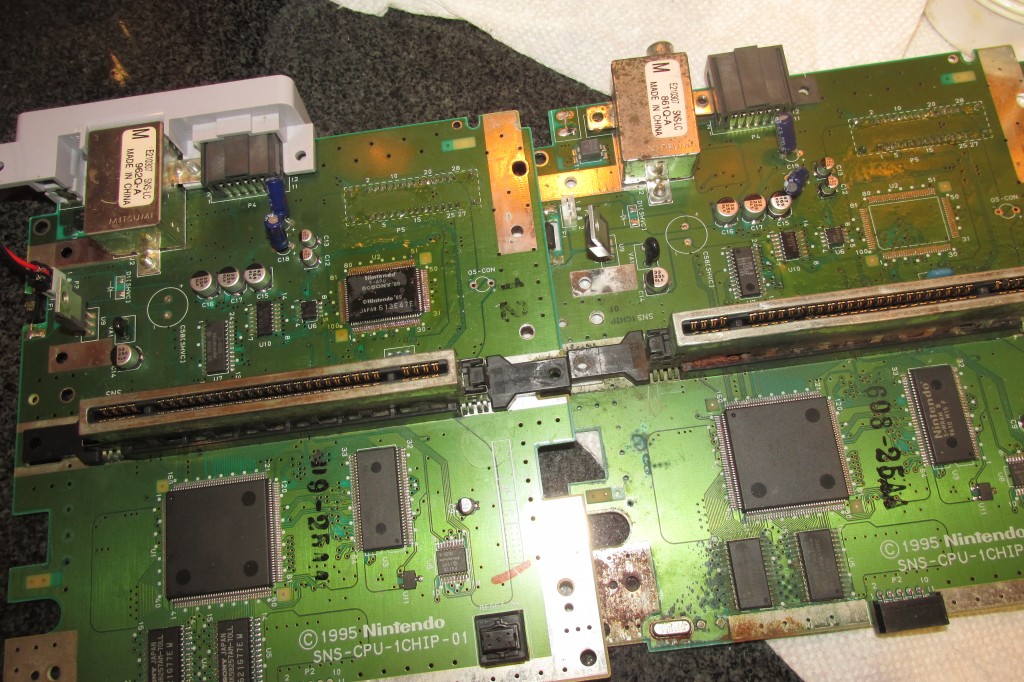 The donor board on the right was totally beyond repair.

To be sure this wasn’t a fluke, I grabbed another board that would freeze at the splash screen and removed the APU from it. I then soldered in the APU from a console that had a totally unrelated video problem. Once again, the problem was totally fixed.

This is both good and bad news to me. The good part is that now I can fix an issue with the later SNES revisions that few people probably realize is so easily fixable. The bad news though is that it may mean all of our 1-chips are probably prone to the APU failing and may be ticking time bombs, just like the older revisions. Heck, maybe even the Mini could be prone to this.