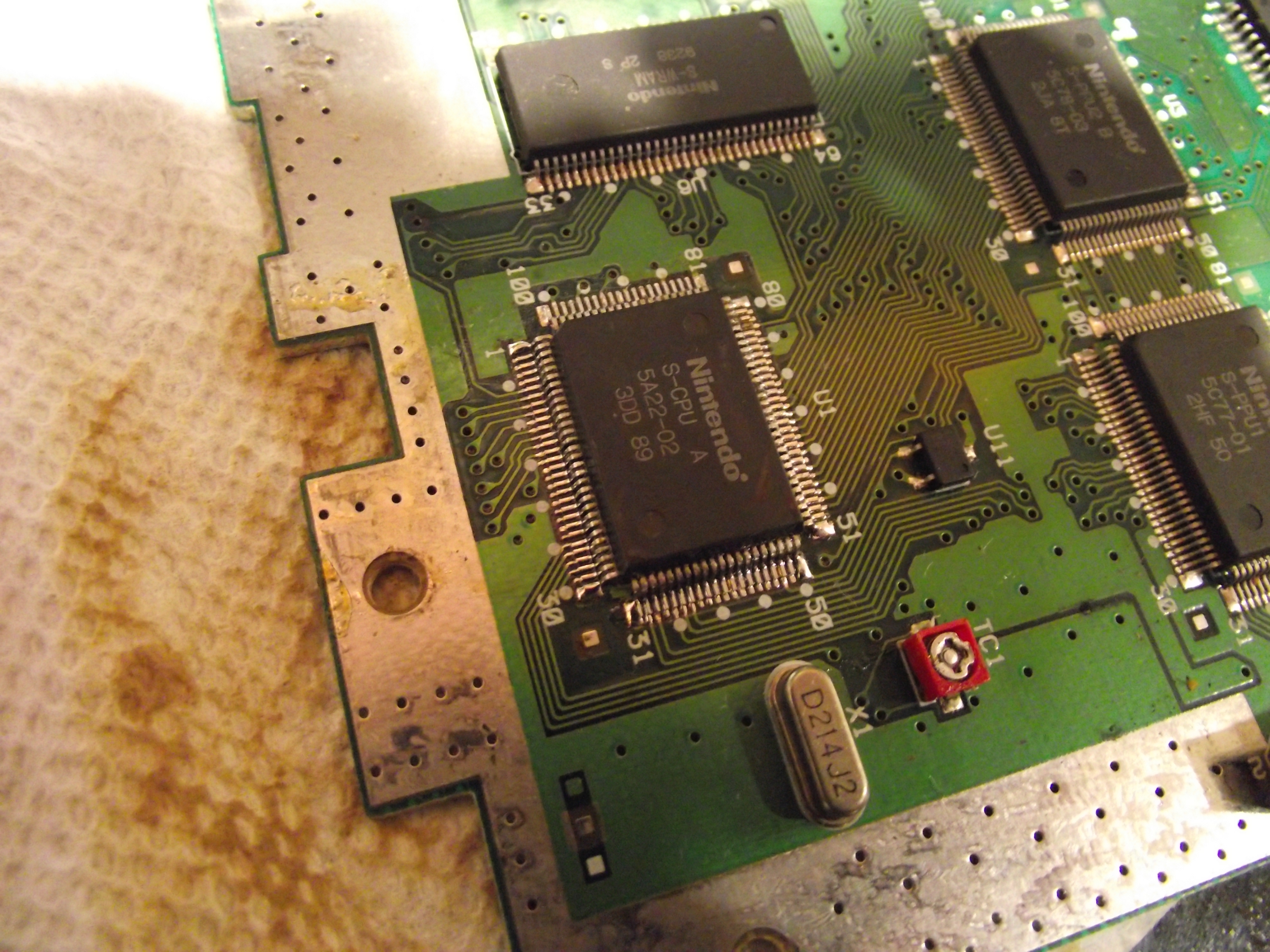 SPOILER ALERT: They ALL have dead CPUs.

I have dozens of these black screen systems. I have a basic flowchart for troubleshooting all SNESes in my head. It’s simple and progresses from the easiest fixes to the most difficult. But I’ll spoil it and reveal ahead of time that they almost all have dead CPUs that need to be replaced. It’s never the easy stuff.

Step one is to clean the cartridge slot with a toothbrush and 91% alcohol. 99% is better but it’s more expensive and harder to find. 91% is good enough. Most folks recommend wrapping a credit card in a cloth, dipping it in alcohol, and then inserting and removing it repeatedly to clean the cartridge slot, but I’ve never understood this method at all. I don’t understand how that could possibly be very effective. A toothbrush seems like the obvious answer to me. For one thing, with the credit card and cloth method you’re only cleaning the removable top part of the connector, which is completely pointless if you don’t also clean the pins beneath it that are soldered directly to the board. For RGB, APU, and 1CHIP models I suppose the credit card method may be all right, since you can’t just lift the connector off on those. But a toothbrush just seems like a far better method to me. You need to use serious elbow grease when cleaning these things, and there’s no way to put the kind of force necessary behind your scrubbing if you’re just using a credit card wrapped in cloth.

Of course, rather than clean it, it’s faster to just grab a known working cartridge slot connector to test the system quickly. Keeping one handy saves time. 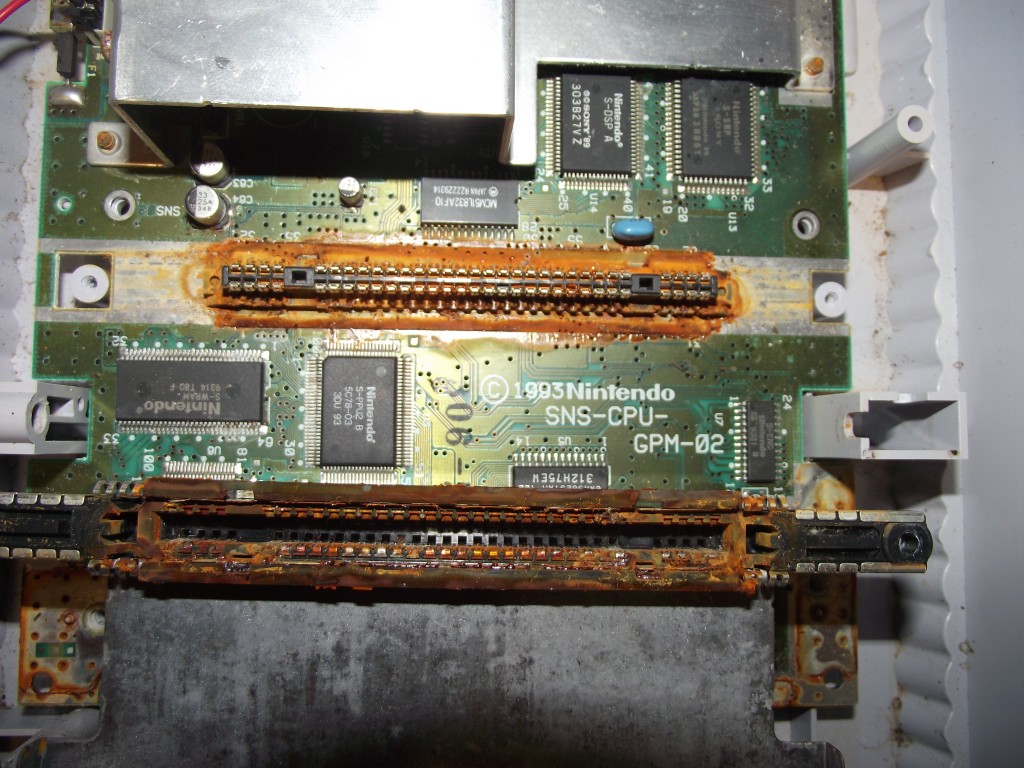 It’s pointless only cleaning the removable top part of the cartridge connector if you don’t also clean beneath. How on earth could you possibly clean a system like this with just the credit card method?

Cleaning beneath the connector is very important. If someone spilled something on the console long ago, you have to consider where gravity would have taken it. Soda spilled on top of the console wouldn’t have just sat on the top removable piece of the connector for all those years, so it’s rare to find much corrosion on the removable part. Any liquid spilled on top of the system would have run down through the connector and settled on the pins beneath. That’s why you tend to find rust and corrosion on these pins. Sometimes they look all green, like the Statue of Liberty. I scrub these with a brass brush to remove any corrosion, then clean them off with a different toothbrush and some cotton swabs. Deoxit is also good to use here. 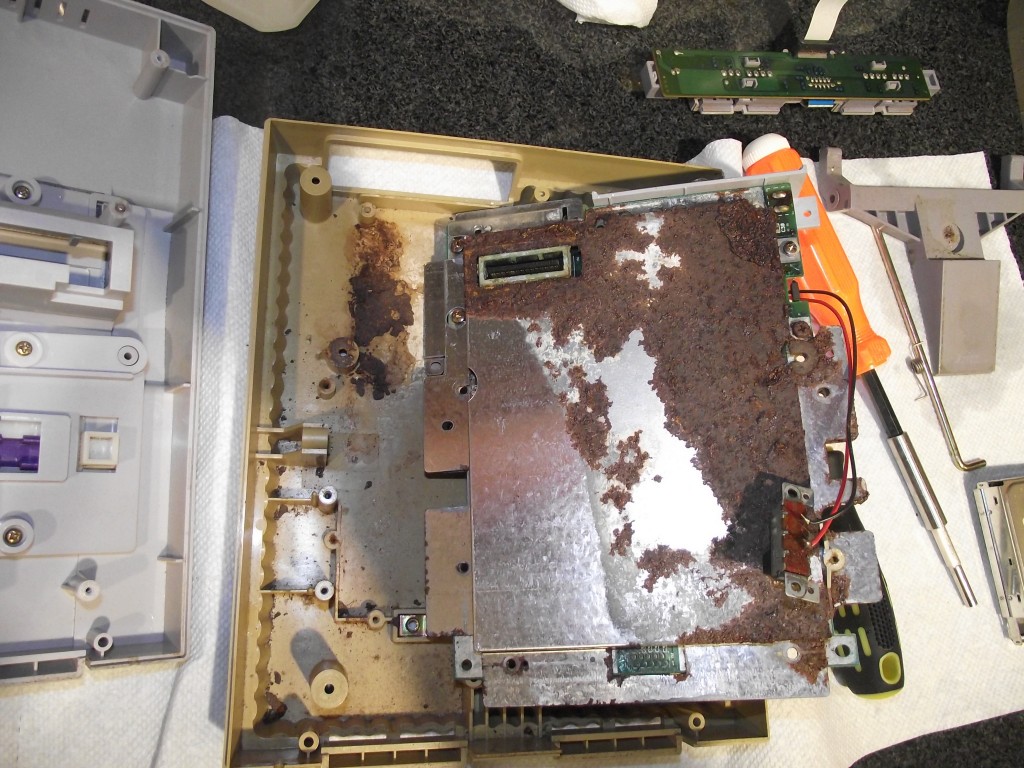 Knowing how gravity works means this kind of result is predictable.

At this point you can test the system. If it works, great. You’re done. But the premise here is that these simple things usually don’t work. Most consoles don’t have so much corrosion, so, while cleaning is always a good idea for sanitary reasons, it rarely actually fixes anything. Ordinary dust and dirt won’t stop the console from reading games. So let’s move on to the next step in my flowchart.

If you hold the reset button on a working console while powering it on with a game inserted, you get a black screen until you release the button. The idea here is that if the reset button is very dirty (again, think spilled soda) then it can be stuck in the activated position, causing the same symptoms as if it were actually being held down. I’ve never actually seen this personally, but it’s an explanation that makes a lot of sense to me, so it has a place in my flowchart and I always first try cleaning the reset button with a toothbrush and a bit of alcohol. If it seems sticky I temporarily desolder and remove it just for testing. It never turns out to be the culprit, but it’s pretty quick to remove so it’s not much of a waste of time. 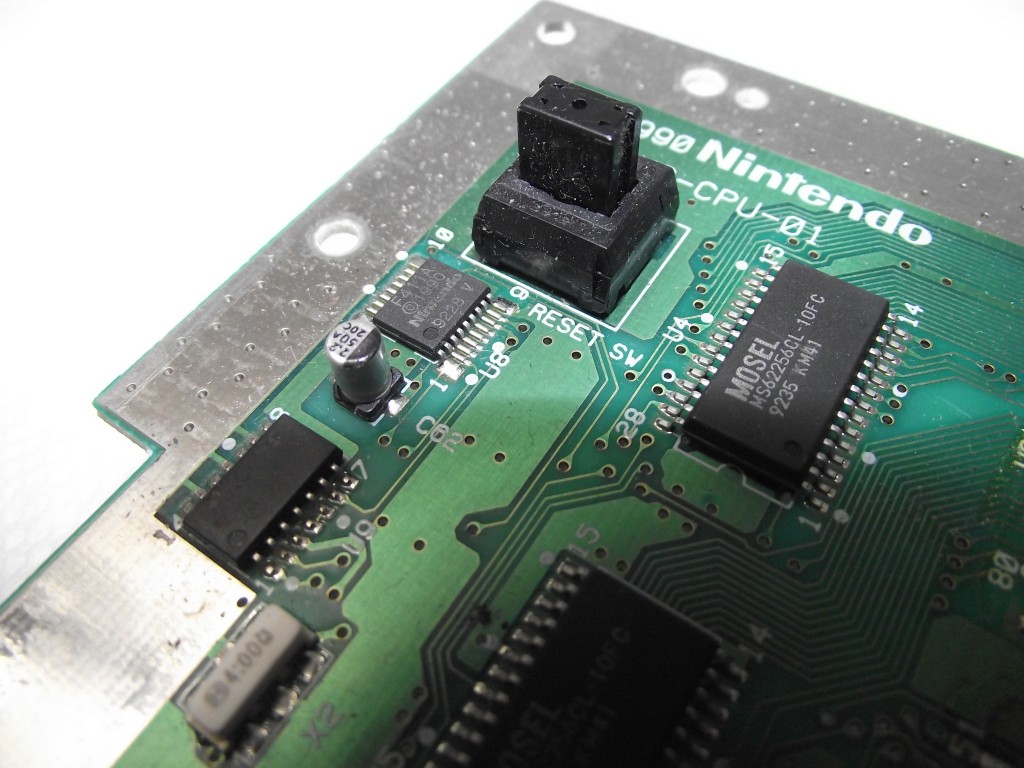 C62 and the reset button.

C62 is a small 2.2µF capacitor right above the CIC chip, near the reset button. I’m told that if this is bad it has basically the same effect as holding the reset button down, resulting in a black screen on all games. Again, I’ve never actually come across a system where this had happened, but it’s an easy thing to replace, so I sometimes try replacing it if it looks funny. It has never fixed anything for me though.

I’ve seen this next thing once and only once. Since it happened once though, it does have a place in my flowchart, since I suppose I could come across it again.

I flip the board upside down and do a visual and tactile check of the solder joints on the bottom of the cartridge slot. When I say “tactile” what I really mean is that I press on them one at a time with my fingers to see if they’re cracked. It doesn’t hurt to quickly reflow them all. It almost never fixes anything, but it can help you eliminate the cartridge slot completely as a possibility. If you are an insane person you can get a multimeter, connect the top removable connector, and then check each pin on the bottom of the board for continuity with the corresponding pin inside the removable connector. This is a colossal waste of time though and you should only do this if you are a masochist. Even with a third hand tool, you’ll nudge the board constantly, your hand will slip, you’ll drop one of the probes, you’ll lose count of which pin you were at and have to start over and you will want to off yourself in no time. Besides, you really don’t need to test. It’s never the cartridge slot that causes these issues. When it comes to the cartridge slot, if everything looks good, it is good. The one time I had a system where this sort of thing was an issue, the solder joint was so badly cracked on the underside of the board I could wiggle it with my finger. If something is wrong it will be obvious.

Next is to check for broken traces. There are no shortcuts here. You just need a jeweler’s loupe and a lot of time on your hands. What I’ve learned from experience though is that you shouldn’t waste your time on this step unless you have good reason to suspect there will, in fact, be some broken traces. Basically that means if you have a system that had liquid damage or was in a very damp, wet, humid, or dirty environment you may want to spend some time looking at it carefully under magnification. So if you open it up and find lots of rust or dead bugs, it may actually have some broken traces. But if you open it and it’s nice and clean, don’t waste your time. Unless, of course, someone else worked on it prior to you. If that’s the case, you should absolutely check for broken traces, scratches, lifted solder pads, and that sort of thing, since you never know what the last guy may have done to it.

An Everdrive, by the way, is something that can be very helpful when you’re not quite sure of the extent of the problem. Some systems may give a black screen on most games, but display garbled graphics on another. Still others give a black screen on 9 out of 10 games but might play one specific game just fine. Those consoles may have hope. To help understand the extent of the problem a bit better I see if it’ll read an Everdrive. If it reads the Everdrive and loads the burn-in test rom, I run it and see what it says. These black screen systems may not read any retail games, but sometimes they do read the Everdrive, though it doesn’t always actually load up fully. It often crashes when trying to display the contents of the SD card. But if it does load and I can get the burn-in test rom to run, it usually is very straightforward and simply says, “CPU —— FAIL”. That’s about as clear-cut an answer as it gets. Almost all the failures are CPU-related, but occasionally you do see some VRAM problems. Those are nice since you can easily grab the VRAM from another console. There’s also plenty of space between the pins so soldering them in is easy. But I’ve only seen bad VRAM two or three times and those had all been worked on previously. I don’t think the VRAM is typically prone to failure. Normally it’s a CPU problem.

At this point the only thing left is to replace the CPU. That’s not as hard as it sounds if you have hot air rework equipment. It’s very easy to remove the old CPU, but you do need to be moderately good at soldering to put in the new one. I usually end up with a few solder bridges at the end that need to be fixed. The hardest part though is locating a good CPU. The reason I have dozens of dead black screen SNES boards is because I have no good CPUs to put in them. Most, I’m sure, would work fine with a new CPU, but the trouble is that there’s nowhere to get them. I found a few IC dealers online that claim to have a small quantity in stock, but they are asking such high prices it would actually be cheaper to buy working SNES consoles for the CPUs than to buy from those bloodsuckers. When I get really badly water-damaged or otherwise screwed-up boards I take the CPUs. Sometimes they’re bad, too. But occasionally they’re good and I can revive one dead system from my stack. It always feels good. Plus I end up producing some unique SNES consoles like 1990 SHVC boards equipped with the later (and much more resilient) “S-CPU B”, which was normally only found in the GPM-02, RGB, and APU motherboard revisions. 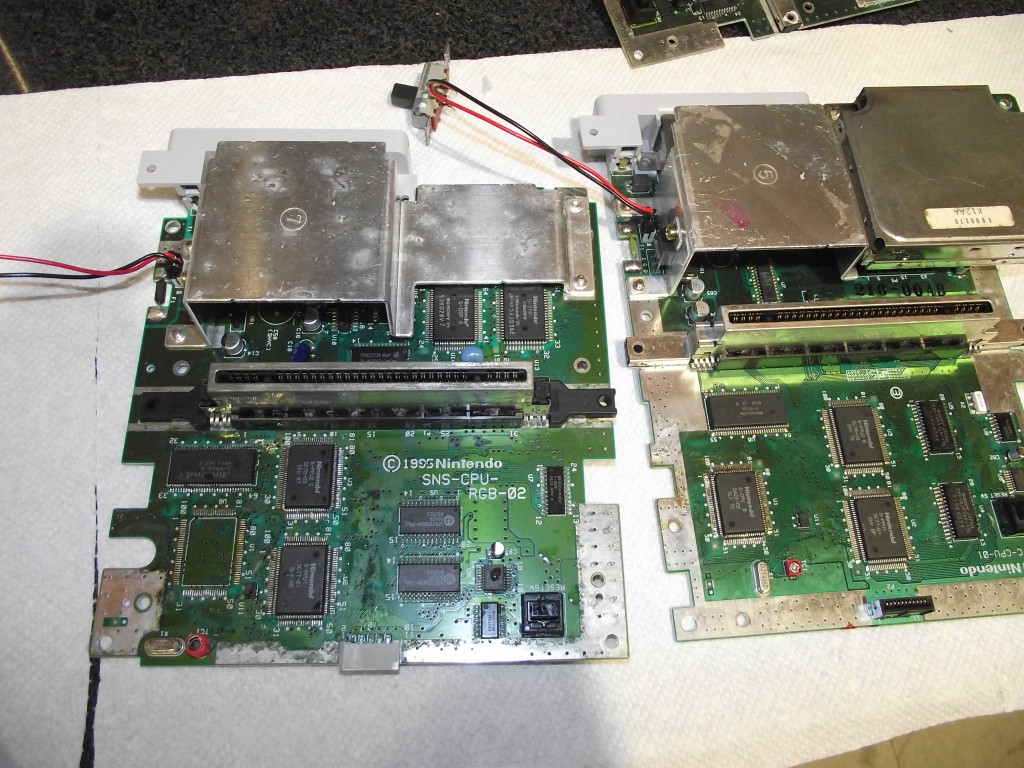 Don’t worry. I didn’t cannibalize a working RGB board. It had been eaten up by roaches and was totally beyond repair with lots of broken traces and the solder mask peeling up all over the place.