I’m on vacation with my family today and the place where we’re staying has Optimum Online service. I’ve never used this service, but I remember there were rumours several years ago about shit service and crazy policies about P2P throttling.

These are the same people who have a TV commercial that claims they are the only ISP in United States to offer 100MB/s service. Yes, they actually explicitly write “100 MB/s” in the commercial. There is no ambiguity in those units; they denote megabytes per second, not megabits per second. This is a blatant lie. OOL does offer 100Mbps (read megabits per second) in some service areas, but not 100 MB/s. They’re just doing that because they think that most people will respond to the capital letters and the exclamation point in the commercial, rather than the actual measurement, which is incorrect. That and the fact that they assume (probably correctly) that even the people who do realise that the usage of the capital letters makes their commercial a lie either don’t care enough to hold it against Cablevision or are in a position where Cablevision is the only non-ADSL ISP available.

But because of the rumours about insane throttling on all service tiers to low speeds as well as the false advertisements, I’ve always had a mild dislike for Cablevision in general and OOL specifically. I also think it’s stupid that the Internet service is called “Optimum Online” while the television service is called “iO”. Time Warner has a separate name for their Internet service and call it “Road Runner”, but at least they’re consistent about it; they call all three of their services “Road Runner”. Verizon also calls all three of their FTTH services — TV, Internet, and phone — “FiOS”. I don’t think Verizon even has a catchy name for their ADSL service; I’m pretty sure it’s just “Verizon ADSL” or “Verizon High-speed Internet”.

My point is that having two names is acceptable, but having three separate names is asking too much of the consumer. Most people can’t even answer the question “who is your ISP?” so asking a person to remember three names for the same company as well as which specific service each name refers to will just cause confusion. Plus “iO” is a stupid name anyway. It’s almost as bad as “XFINITY”.

But I did some speed tests here and they’re consistently good. I was tempted to test some bittorrent downloads and I did for about 10 minutes but I soon started to feel guilty, seeing as it’s not my connection or anything. It was just a linux ISO though so there’s really nothing to feel bad about at all. It looks like these people have the 15Mbps/2Mbps plan. I was able to download at 1.4MB/s on the linux ISO but the speed soon dropped to about 200KB/s and remained stable. I’m sure that’s not throttling though; it’s just a bad configuration on my side, I think. I was curious to see how long the speeds would be sustained, but I really felt too self conscious running a torrent client on a stranger’s connection so I closed it.

On the other hand, I was able to download consistently from my FTP server at home at about 1.7MB/s, even while it was busy seeding ~1000 torrents. This is why FiOS is so great. While they don’t explicitly allow you to run any type of server from a residential connection, there’s nothing stopping me from running an FTP server. I ran it on port 2121 just to be safe, but on dslreports I read that they don’t block it even if you do run it on port 21. My IP address at home barely ever changes either. It’s a bit like the Earthlink connection I used to have, where running any sort of server was formally forbidden but, in practice, even port 80 was open and I could host a tiny website for years, without having to change the DNS information more than once or twice a year since the IP address always stayed the same. 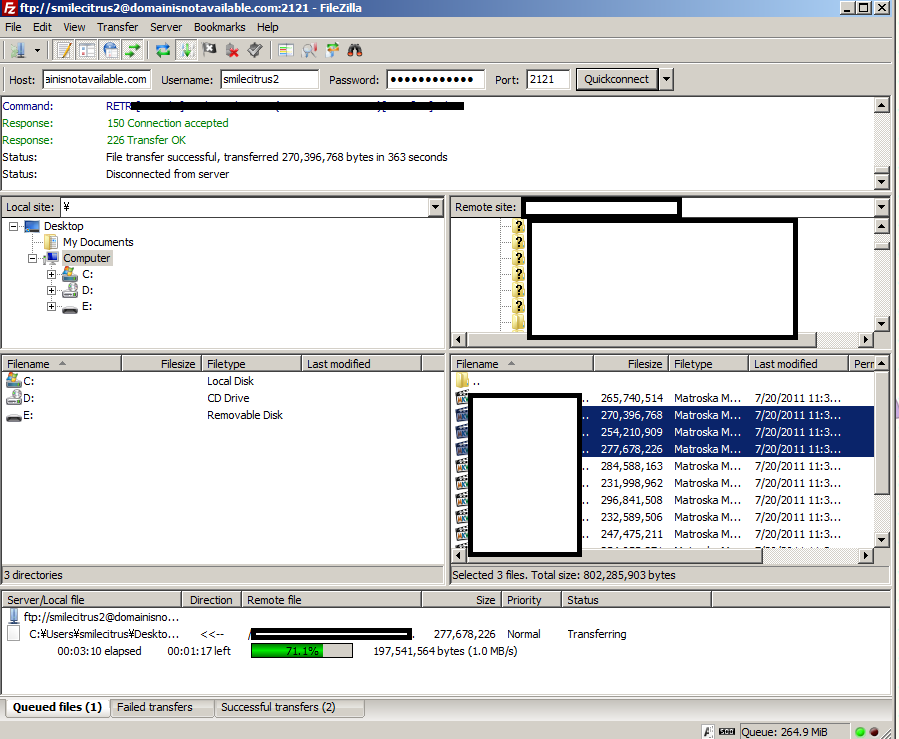 Verizon don't seem to care that I use my full bandwidth 24/7. Who needs to pay for hosting when FiOS residential service is this fast?

My conclusion from today is that I wouldn’t mind terribly if I had to live somewhere in which Cablevision was the only ISP. The channel guide menu on the STB is a bit slow to respond, but I bet this is because it’s an old SD STB they have here. This is the first time I’ve ever used OOL or seen iO TV, so I wouldn’t know if the Scientific Atlanta 4200 is still being given out on new installs or not, but I wouldn’t be surprised if newer boxes have a firmware update or something with a nicer-looking guide. This guide is faster to respond than the guide on the HD STBs from Time Warner Cable that I had, but slower to respond than the Verizon FiOS STBs I currently have. The selected line on the guide moves less than one second after you press the up or down arrow with this iO TV STB, whereas with the TWC boxes I had it was at least one second or even slightly more between the time the user would press a button and the time the selection bar on the screen would actually move.