These are just a few of the prizes I got in the White Day event.

I barely played at all, to tell the truth, and I still ended up getting some fabulous prizes. The last one is from SRO-R. Of course, I’m happy about it since I’m the one who benefits, but it’s quite obvious that the ease with which these items can be acquired will be ruinous for the game economy. It really ought to take a lifetime of grinding and alchemy, not to mention massive amounts of real currency, to be able to obtain these Seal of Nova and “Rare” items. Yet a person like me, who had barely played in the last year, was able to get those items using a brand new character that I hadn’t even been botting very much with. Case in point: I bought a level 101 “Rare” earring from a guy for 150k gold. That’s how flooded the market is with Seal of Nova and “rare” items; people will sell them for less than the price of a single star level 35-50 Dimension Hole.

Ruined though the economy may be, it was to my great advantage, especially since my character is a newly created one. I once again am reminded of my theory that the bad luck I used to have in SRO was due to some sort of invisible “luck” factor built into the game, one that is assigned to each character upon creation and never changes. Not that I really believe there is a hidden “luck” statistic, but I did play legitimately without botting from level 1 to 80 during cap 80 and it is true that I never once got an SOS drop or even a +5 drop. Yet, in the space of several days of light botting (not even 24/7), my character got these: 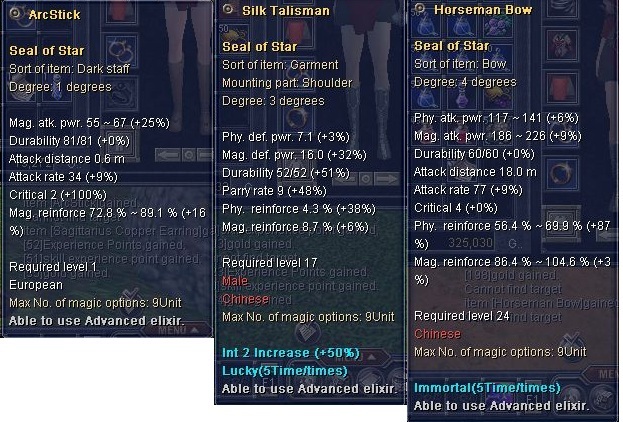 As though that wasn’t enough good luck, the new equipment exchange system is worth mentioning. I haven’t seen too much written about this yet, which surprises me because it strikes me as one of the biggest game-ruining updates ever implemented, dwarfed in imprudence perhaps only by the elimination of the triangular trade system. The idea of the exchange system is that if you have, say, a level 56 sword and you need a level 56 blade you can go to the Magic Pop NPC in any city and exchange the sword for a blade or any other Chinese weapon of equal level with randomized stats. You pay a small fee in gold for the exchange. The key phrase here is randomized stats. This isn’t random in the same sense that the alchemy success rate is “randomized” to never, ever work when you most need it to. No, it’s “randomized” in a good way. Say your sword has shit stats, no blues, and is +0. You might get a +5 blade with full blues and superb stats in exchange. All it’ll cost you is a very modest fee in gold. Here are some items I got today with my new character by exchanging equipment with no bonuses on them at all: 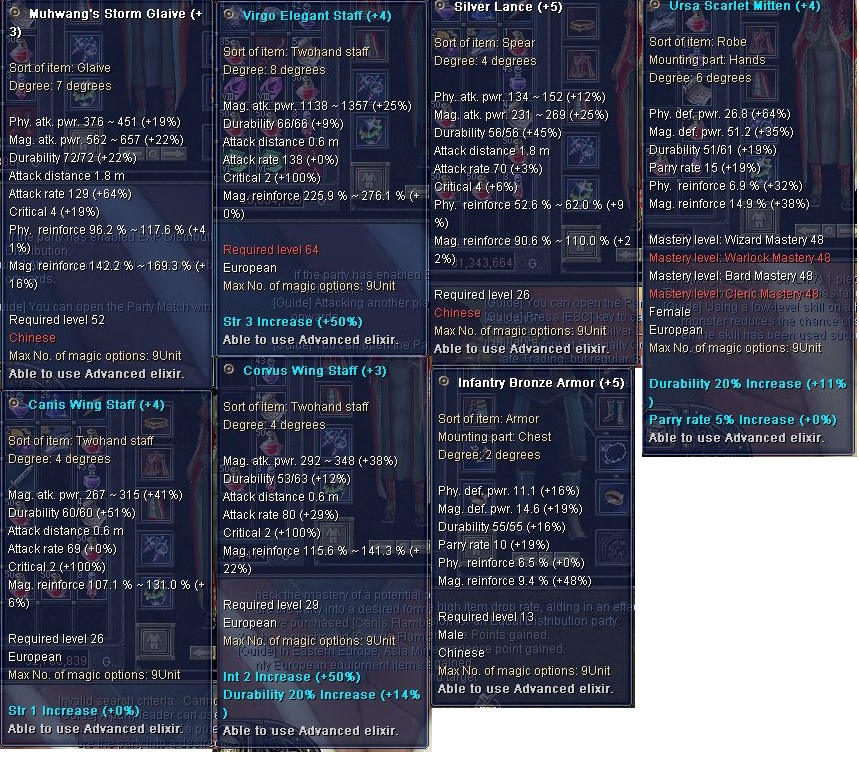 The latter requires a teensy bit of elaboration. Let’s say you use blades and have a level 52 blade with garbage stats. You have no money or patience for alchemy to fix the stats on the blade. As long as you have at least a little bit of gold you can exchange it for some other weapon and then exchange that weapon back into a blade. There is a good chance the resulting blade will have better stats than it did when you started the process. If it doesn’t, you can just keep repeating this exchange loop, as it were, until you get a blade with stats that you can be satisfied with.

The fee is not enough to discourage gaming the system like this. I can’t remember the exact fees, but for low degree stuff the fee was only four digits. For the 8th degree staff it was around 250k or thereabouts. It’s highly affordable and less of a gamble than you might imagine. I didn’t go through the loop more than three times on any of those items, if I recall correctly.

Once again, this change to the game gives some instant gratification and I’ll even admit I did momentarily feel like posting a global chat message proclaiming my overflowing love for Joymax when I realised how I could take advantage of it, but, just like the White Day event, it takes one of the meaningful challenges out of the game while leaving untouched the most injurious of the game’s many flaws which is the amount of time it takes to level up. Planning ahead was one of the things that made SRO great. You could never be certain that you’d be able to find equipment mid-degree. By this I mean that, while you could always be sure in the knowledge that, in a pinch, you could buy NPC equipment, you couldn’t buy equipment after the first item for each degree from NPCs. So if you were level 52, you needed to start thinking about buying your level 56 and 60 weapons because, though you could buy the level 52 weapon from the NPC, you had to buy the latter two from actual human players via a stall or direct exchange. The same was true for equipment. The stall network made it easier to find the second and third tier items for each degree but didn’t actually do anything to reduce the scarcity of them. The exchange system, on the other hand, actually reduces that scarcity and makes it easy to create out of thin air equipment that cannot be purchased from the NPCs. This reduces the importance of long term planning and will surely precipitate a sharp fall in the prices of most non-SoX equipment and perhaps even elixirs.

Having said that, I should really quit biting the hand that feeds me. I will exploit the exchange system to the fullest. It’s not a bug, so I can’t be banned for it. I just can’t help but wonder if Joymax realised when they implemented it how generous they were being.

The most incredible episode in my series of good luck, however, must be the following: 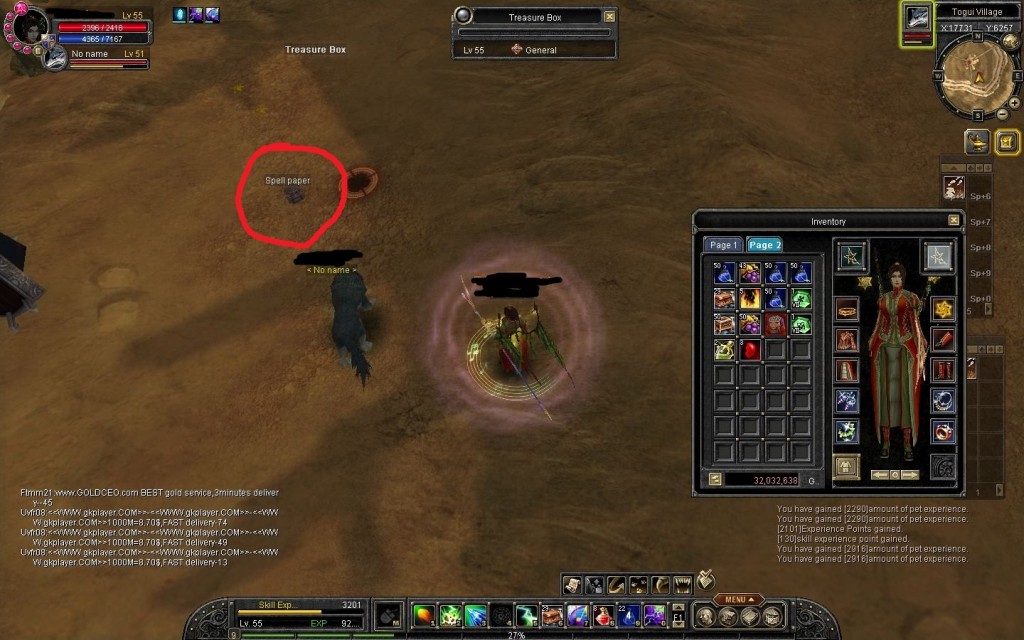 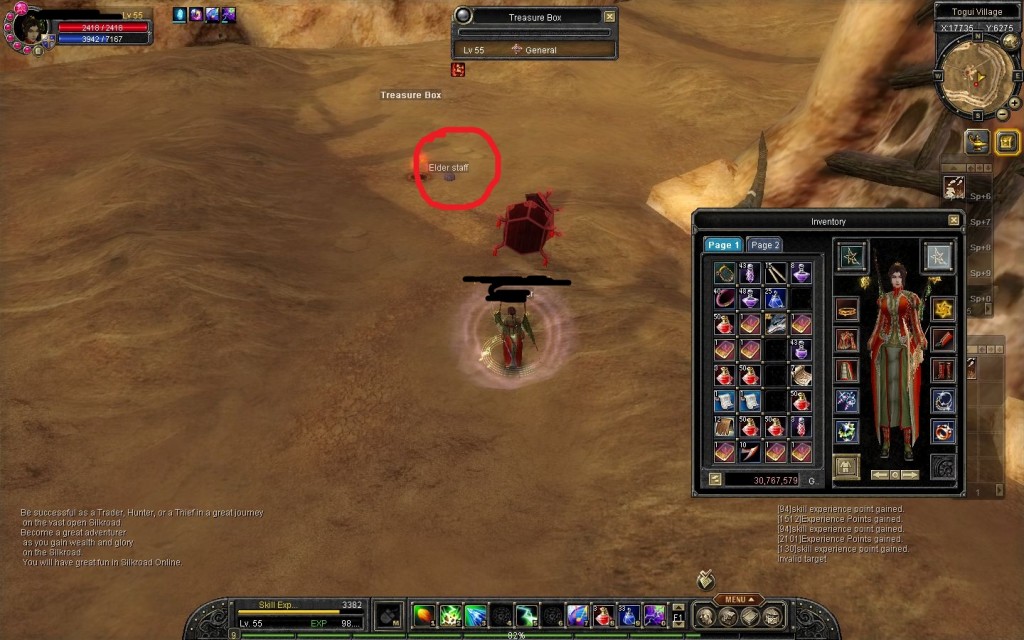 I’m telling the truth when I say that I only started playing again in mid-March. I went to the Forgotten World a total of three times since I started playing and, as is my wont, only went to the first treasure box. I got Spell Paper on my first run, Red Tears on the second, and Elder Staff on the third. I’m now in the peculiar situation of having the two most sought-after talismans but nonetheless being unable to finish the quest for lack of a Puppet, which is not all that rare of a talisman. Yet in the entire stall network there has not been a single puppet since this morning, when I got the Elder Staff. I suppose I’ll just try to get one myself since I’m only level 56 and have no need to finish the quest just yet. I can’t wait to one-hit mobs in DW stone cave with my SoSun staff!