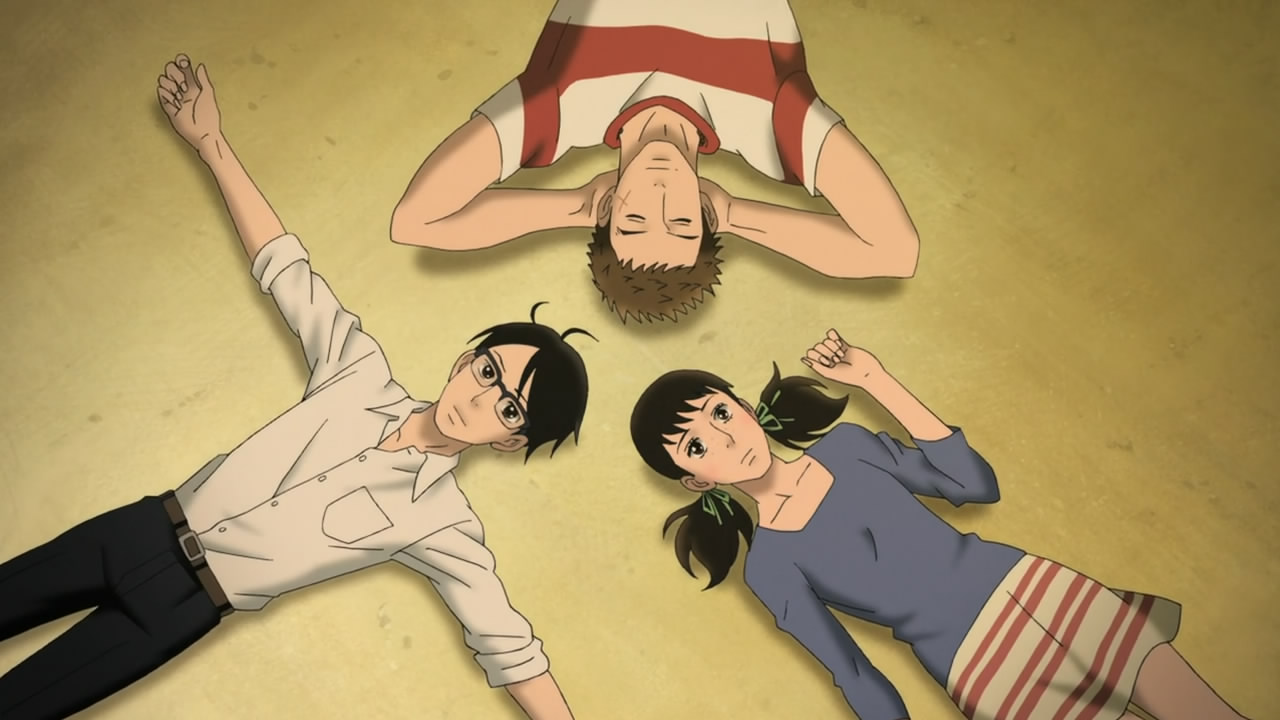 I just marathoned Sakamichi no Apollon today and I’m convinced it was the best show of this last season. Granted, I watched very few shows this season because throughout most of it I was overwhelmed by difficult exams at school and a new OSX86 laptop project I was feverishly working on for a while, but I think I can pretty much dismiss the rest of the shows of the season as inferior without bothering to watch them.

The first episode really got my attention immediately for reasons that show I completely missed the point: I felt tremendous empathy for poor Kaoru climbing that slope every morning to get to school, the reason being that my own school that I attended until last semester is at the top of a hill far steeper than the one in the show. Carrying books up something that steep before a day of expensive, insipid classes that teach you nothing you couldn’t learn for free in less time on the Internet is not something I would wish on my worst enemy. Seriously, if we can put a man on the moon, why can’t we build escalators on sidewalks?

For a so-called josei-muke show the characters have relatively small eyes. Ritsuko, perhaps is an exception, but even she doesn’t have those very large sunfloweresque eyes that I would have expected of a lower tier show of this genre, proving the high quality of this show beyond the need for any further discussion. Nonetheless, I’ll further it.

This is one of those shows for which, after watching the first episode, you say to yourself, “Ah yes, this is why I continue to convince myself, season after season, that there are worthwhile anime out there. It wasn’t self-deception after all”. The theme song alone engaged me immediately, to say nothing of the fun and lively music in the show itself. 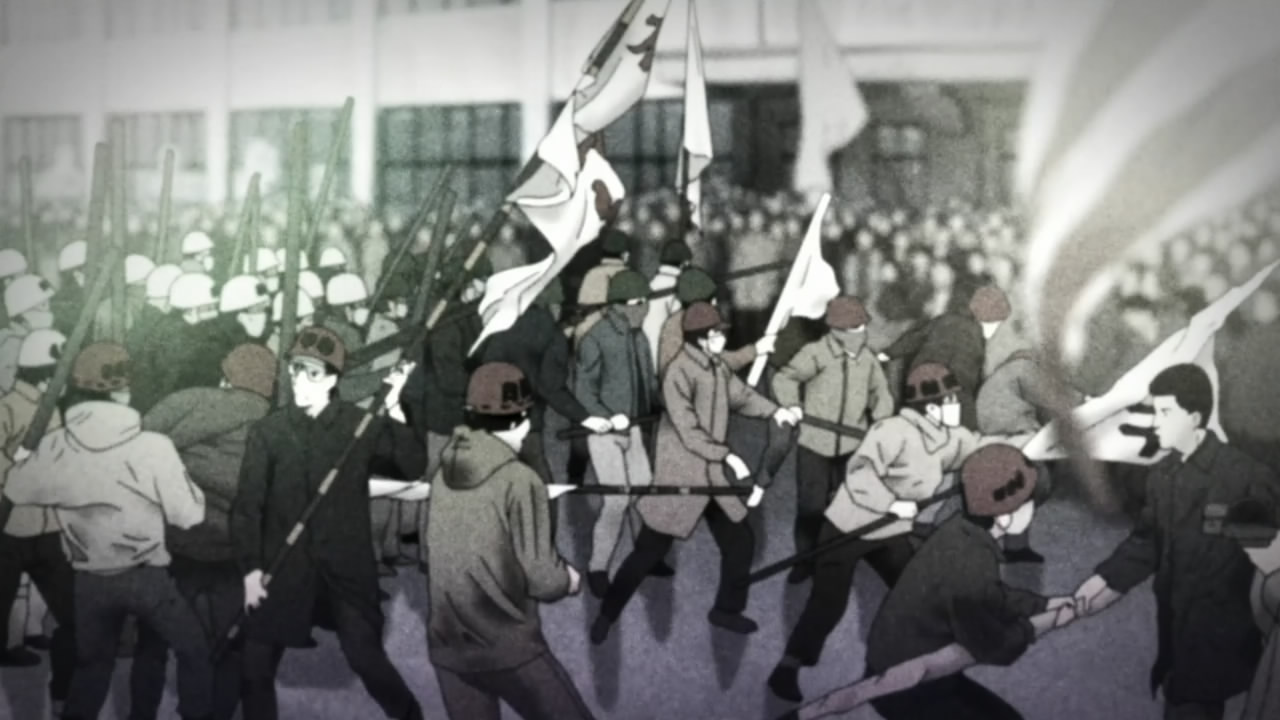 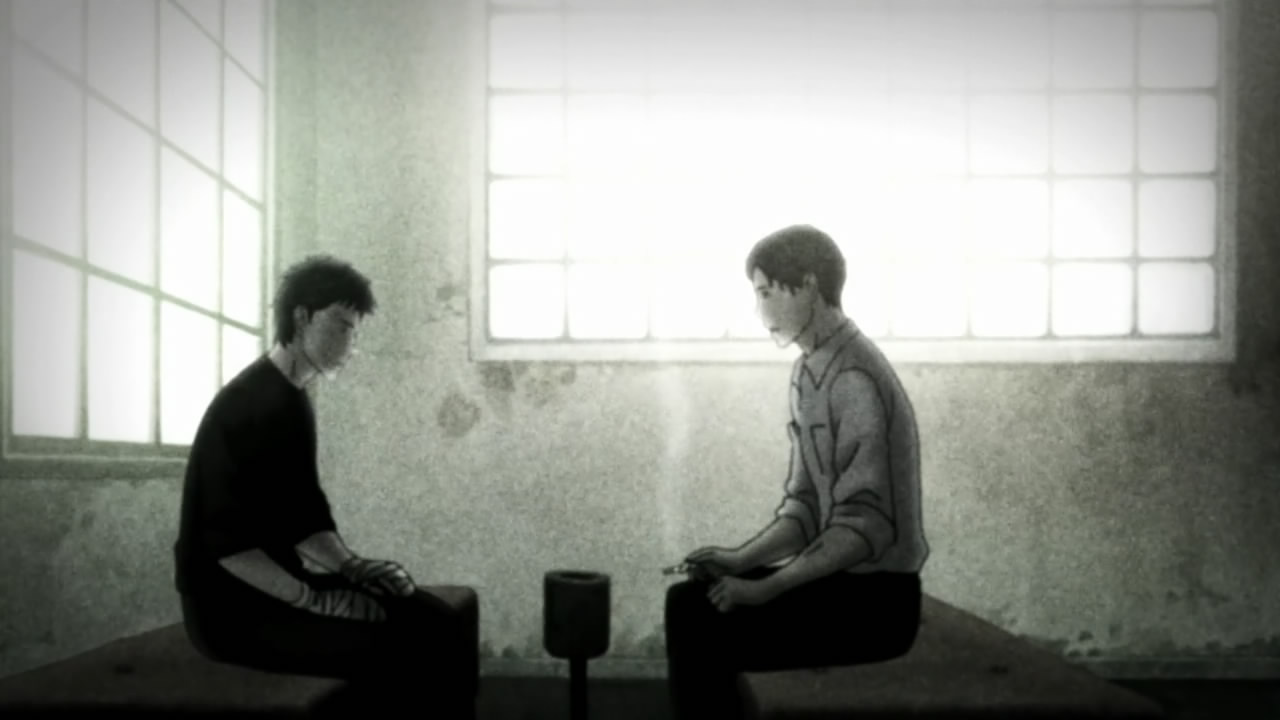 I was hoping for a bit more about Jun’s activities in the Zengakuren student strike, but that was not a major plot point it seems. Any time I watch a period show set in the 1960s I hope that the writers will make best use of such an interesting time period, but I feel like it was almost wasted in Sakamichi no Apollon. On the one hand, the fact that the time period is almost irrelevant is appealing to the extent that it’s the sort of story that could happen anywhere, in any era. However, it just seems like a loss to me that one of the major side characters, Jun, unwittingly gets himself involved in a student strike, yet nothing much is made of it except that it ends up being the indirect cause of him moving to Tokyo later on. It’s almost as though it was thrown in there to say to the viewers, “Here’s this apropos reference, just in case you forgot it’s the 1960s”.

The costumes, on the other hand, are really fantastic. There’s something about the cap and red and white striped shirt that Sentarou wears that is very friendly and appealing, rather than threatening. Jun’s plaid pants are the pinnacle of style, if you ask me, though I could never wear them myself due to being vertically challenged. Ritsuko is agonizingly cute with her freckles, pigtails, ribbons, and red winter coat. It’s a shame that the characters are usually wearing school uniforms and that we didn’t get to see more outfits, though the school uniforms themselves are interesting as well since each character wears them in his or her own idiosyncratic style. 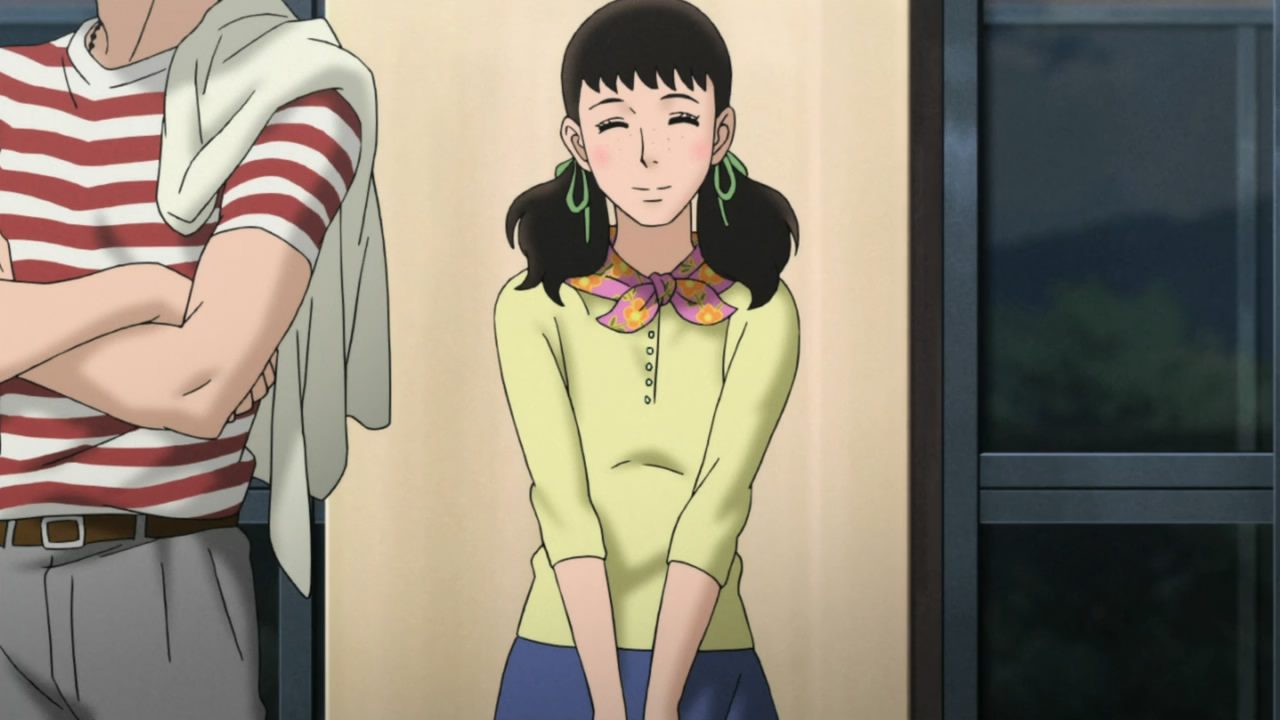 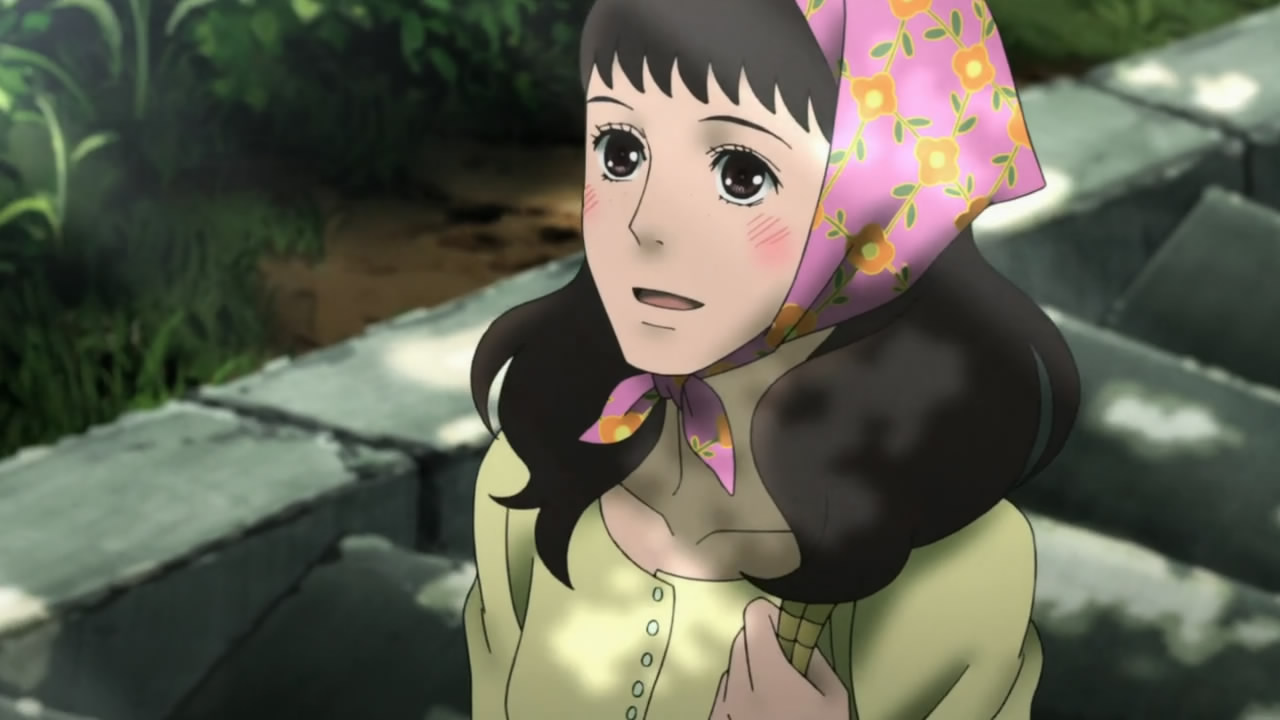 Even the unimportant background characters have nice outfits. For example, the mother of Ryunosuke, one of the kids from the rock band that Kaoru and Sentarou upstaged at the culture festival, looks exactly like Jane Jetson and this lady with the pink coat and hat is the type of extra mile effort that, while not strictly necessary, adds flourish to the show. The clothes and music all make me feel nostalgia for the era, which is an incredible feat considering that I hadn’t yet been born at the time. 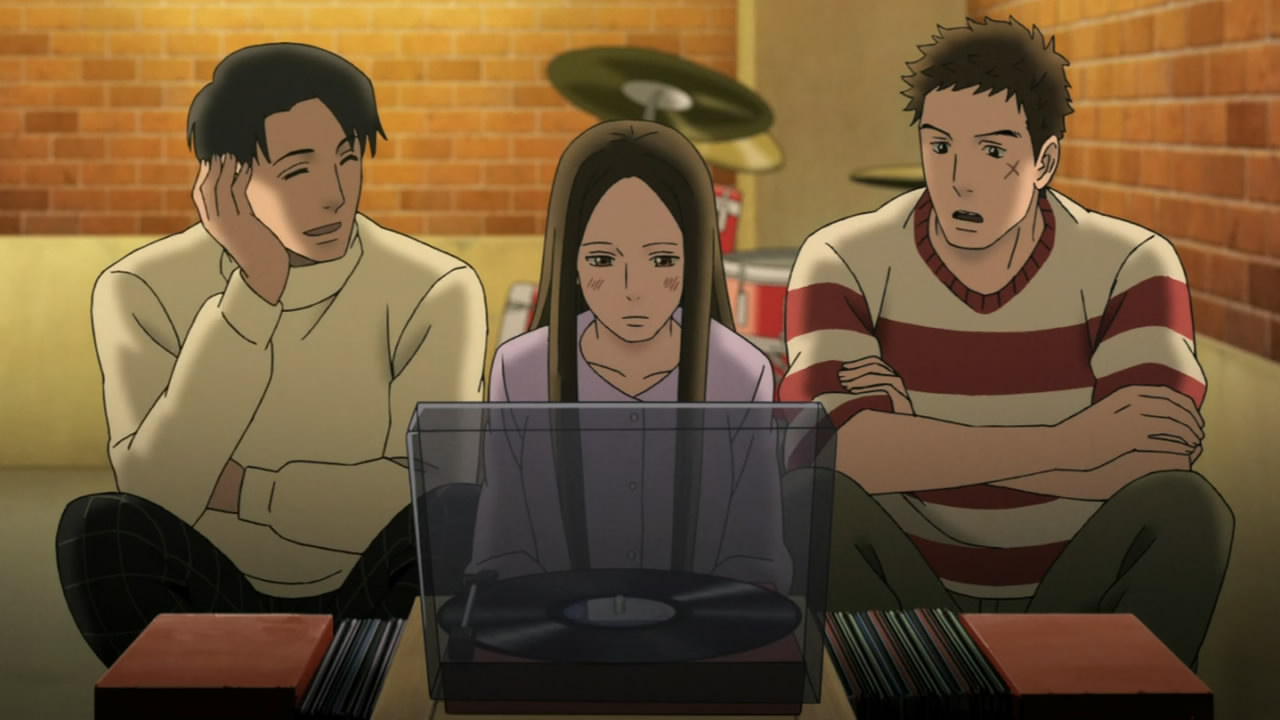 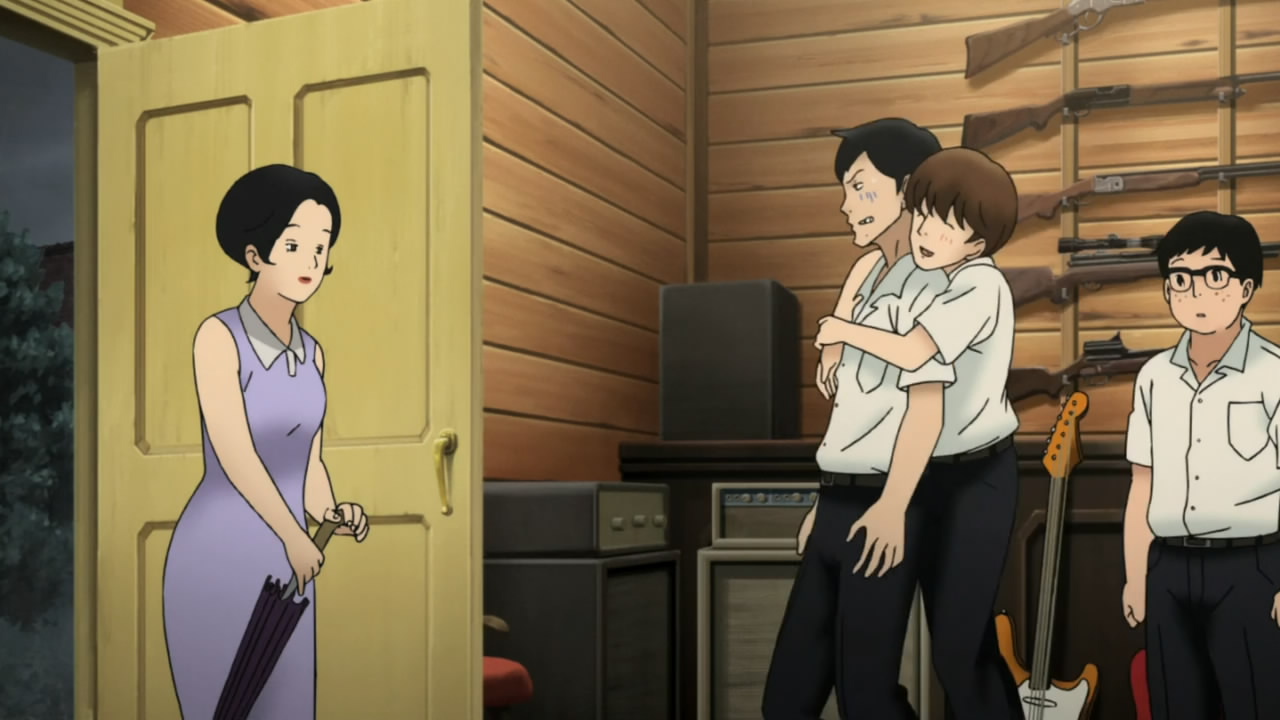 For a 12-episode series the pacing was quite good. There were times where the show felt a bit heavy-handed like when Yurika and Jun were at the train station and he was about to leave for Tokyo and the scene with Kaoru and Sentarou on the hospital rooftop. While the problem with the former is that it’s simply a really overused cliché, the latter, I personally suspect, wouldn’t have seemed so overstated if it weren’t for the fact that by the time this epiphany moment comes along the viewer has only known the characters for about four hours in total. If it had occurred in episode 22 of a 24-episode series instead of episode 11 of a 12-episode series it may have been quite different for me.

Make no mistake though; my whining shouldn’t be construed as a lack of emotional response. I was tearing up plenty during the last couple of episodes. It’s times like these that I really have to stop and wonder if a show was actually well done and I’ve been legitimately affected by it emotionally or if I’m just a sucker for trite crap and a crybaby in addition. But then I remember that I have impeccable taste and that if I liked something then the only answer to that question is that it must have been good to begin with because retroactivism and coining neologisms are valid as long as I’m the one doing it.